Christopher Shinn’s provocative time-shifting 65 minute piece, Dying City, explores the themes of love, loss, grief, brotherhood, the past, duty, and identity. Kelly, a young, repressed Harvard grad psychologist is visited one evening at her New York City apartment by an unwelcomed visitor. Her husband Craig, who was also a student at Harvard, died in Iraq under unclear circumstances over a year ago when he was called up again by the Army. When she is visited by his actor identical twin brother, Peter, Kelly is placed in the uncomfortable position of recalling her last days with Craig, the arguments they had about the war, and the state of their marriage as Peter shares Craig’s letters with her. Her complicated relationship with Peter makes the night even worse. Under the direction of Signature’s own Matthew Gardiner, Rachel Zampelli (Kelly) and Thomas Keegan (Peter/Craig), give a master class in acting as these three troubled characters.

As a nation, we’ve seen more than our share of Iraq/September 11th plays. In fact, we’ve pretty much been inundated by them since 2003. What sets Shinn’s work – which previously appeared at Lincoln Center in 2007, although it was slightly longer then at 90 minutes – apart is that the piece is less about that historical experience as a whole and the politics surrounding it (although those are certainly discussed) than how the loss of a family member in the war can cause those left to question deeply-held attitudes towards that person and the foundations of their relationship. Shinn, at the core, masterfully explores the nexus between larger war situations and personal loss through emotional yet intellectually-driven dialogue between Peter and Kelly and Craig and Kelly (some of which occurs in flashbacks). The use of flashbacks and a non-linear time structure is an interesting, yet appropriate choice given the themes that are explored.

However, because the script/story never really goes anywhere until the final moments, the audience may be left saying “yes…so?” Perhaps that’s the point – that emotions and views are left to simmer and finally rise to the surface, but this structural choice may not necessarily result in a powerful night of engaging theatre/story-telling. Thankfully, this was not the case here thanks to Zampelli and Keegan’s fine performances.

Zampelli continues her fine streak of incredible acting in this play. Much like her extraordinary performance in the No Rules Theatre Company production of Stop Kiss, she gives a nuanced and emotional performance in this play. Thanks to her clear understanding of Kelly, she completely embodies a person who keeps all of her emotions closely held even though she may be a complete mess inside. Careful physical movements and vocal inflections provided deep insight into the character. Her chemistry with Keegan, both as Peter and Craig, is believable and natural. Nothing feels forced even in this admittedly ‘talky’ play. Zampelli is certainly well on her way to becoming one of Washington, DC’s strongest actresses who can seemingly take on any character.

Keegan meets the challenge of portraying the identical twin brothers. Although both are troubled, these troubles manifest in different ways. While Peter is more apt to confrontations, Craig is one to brood on his own or at least express his frustrations to others rather than the object of his anger unless provoked. Craig mostly holds on to secrets, while Peter is happy to share all of his thoughts no matter the damage they cause. As Keegan is tasked to be Craig or Peter in a particular scene, he immediately is able to become that particular character. His versatility, ability to distinguish one character from the other, as well as his uncomfortable chemistry with Zampelli, make his performance a must see.

Unlike the Lincoln Center production of this play, which used moving platforms to signal when a flashback was occurring, Gardiner has chosen to simplify the technical approach. A series of apartment doors opening/closing and subtle lighting changes signal whether a particular scene occurs in the past or present and whether Kelly is engaging with Peter or Craig. While this choice may make it harder for the audience to follow along, I appreciate the subtlety since the focus here is less on ‘what happened’ to these characters and more on ‘why things happened the way they did and why those moments continue to haunt.’ In this regard, the past and present meld together. Kelly’s recollections of the past influence her current state.

Signature’s production values are first rate. Daniel Conway’s scenic design captures a New York City apartment of an intellectual couple with several bookcases and a multitude of books and a view of the skyline at night/day. Frank Labovitz’s costume design, likewise, is modern and simple. Colin K. Bills’ lighting design is appropriately subtle but does enhance the uncomfortable and tension-filled atmosphere as does Matt Rowe’s sound design and Peter Lerman’s original music.

Signature continues on its path of exposing Washington audiences to modern, thought-provoking plays with its choice to mount Dying City. While this play might not be as accessible to audiences as last season’s Really, Really, I admire the company’s decision to make the bold choice to give it a chance. At the very least, it provides us an opportunity to witness some of the best acting I’ve seen so far this season.

Running Time: 65 minutes with no intermission. 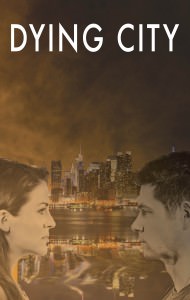