Which I find a bit odd. You would think that it would take the pressure off, right? We could all just not talk, and everyone should be fine with that (now replace “everyone” with “The Dalai Llama” and you have something more akin to reality). You would think that people would love a moment to collect themselves so that they could express themselves more coherently and cogently to the others in the room. And then you realize that the truth of the matter is that most humans will not only wear a hole in their neck where their vocal cords used to be, but will, in fact throw up their lungs and kidneys on the floor in order to fill a silence that lasts more than ten seconds. 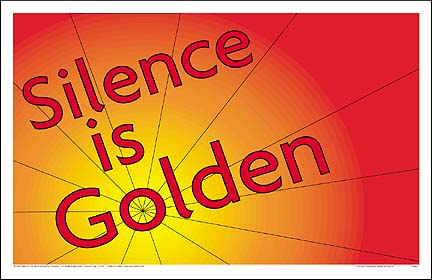 I am tempted to point out that there is a truth in silence (but that would be far too pretentious), so I will instead say that there is nowhere to hide in silence. This is very true in conversations between people (I’m sure it’s also true with kittens, antelope, and ferrets {though, less so with spruce and daffodils, perhaps [and daisies are just idiots in every way}) but even more true in theater.

One of my favorite moments in any show is the moment when nothing happens. You get to watch the entire audience begin to squirm (this is especially fun when you are the one onstage {and a total sadist [don’t judge]}).

I am of two minds about the spell of silence. On the one hand you have an unspoken (*ahem*…sorry for that) relationship that forms with all parties in the room. You create a pact of peace that is obvious and powerful. There is stillness, observation, and acquiescence to the power of the whole (including yourself) that, while not necessarily serene, holds the seeds of serenity for those who choose it. The other hand (probably the left one {sorry, south paws}) is that silence  is inflicted on those that you have captured with your words or actions. It becomes almost a punishment. A way to dominate and control. You gain the high ground in any conversation and the ability to cut down any challenger simply by speaking as soon as they do. Either way it becomes a powerful tool, for dominance, or for peace.

And then there is the end of the silence. The One Who Speaks. And the use of silence becomes apparent almost instantaneously. It is used to break every wall.

As silence stretches, people will begin to tear their own defenses apart in a mad rush to end the silence out of fear (apparently, silence is scarier than just about anything), or in a mad rush to be ready for whatever is being said afterward (because silence lends a gravitas to what follows that no words ever could).

People will leave themselves totally vulnerable to whatever experience awaits after the silence. But the one who holds the silence (and there are times when we have a visceral awareness of who holds the leash silence weaves) must be just as vulnerable or just as confident as those he silences, or the moment has no weight and passes without worth.

Now we come to the moment that silence is broken. Let us see what pours forth. In the case of dominance, the creator of the silence will use it to break down the individuals he silences. When the fear of silence becomes too great, the weakest in the room will speak. This is almost always the case. And once this person starts talking, you know it’s over for them. Because they have transgressed, they feel that they must explain the reason for their actions (in this case, speaking at all). So they begin to flesh out whatever statement they have made. Then they keep fleshing it out. And they start backpeddling because they have begun to spill information that they would never normally say. Their conversational filters have broken and they begin to spout anything that comes to mind (why they hate the Bee Gees, or why they feel guilty about eating bacon {which no one should ever feel guilty about [if we aren’t supposed to eat pig, why does everything about them taste good, even their asses?]}). This is the same way that you break an audience and force them to give everything they have to those on the stage. The floodgates open and they willingly accept anything you might give them, as long as it makes the silence stop.

Or you give them something that changes them fundamentally. Instead of taking, you can give. As the wielder of the silence you can create a unity with all those who share the space. You can tie a line of serenity to them that allows huge amounts of emotional information to dance across its length. You can silently and slowly become the guardian and the orbiting satellite, altering the room and its occupants as the waves alter the beach; slowly and with great care. You can tug at different vertices and watch the emotional swell and ebb. And in the midst of this gentle moment, the audience will willingly open to you. They will kindly move their baggage to the side. They will slide open their walls. They will sit on the verandas of their own minds (and they will wait, refreshed by the breezes that exist outside the limitless tunnels of their own thoughts). They will hope that you will give them something they can hold. Something they can carry with them back to their fortresses. And, if you have managed to draw them to this place of serenity, you will. You will give them words that float across the connective tissue of this shared experience. You will hand them the very heart of you, the part you may not even have known existed, because it is the only thing worth giving to these people willing to share it with you.

And that is my favorite moment. Sharing something unequivocally true and having it accepted graciously. I can’t wait to see it again.

LINK
Read other articles in Ranting With Cyle.