Choreographer Parker Esse who was the recipient of a Helen Hayes Award for his high-kickin’, foot-stompin’, hand-clappin’ choreography for Arena Stage’s Oklahoma!, is back in town to direct and choreograph Catholic University’s of Finian’s Rainbow, which has 4 performances beginning this Thursday night, October 25th at 7:30 PM. Parker fills us in on his Finian’s Rainbow experience.

“I grew up in Houston, TX performing in musical theatre. I started training with the Houston Ballet when I was 9 years old. Early on, I knew this was the path I wanted and when I was in High School I began attending Houston’s renowned High School for the Performing and Visual Arts (HSPVA) as a dance major. From there I auditioned for and was accepted for early acceptance into New York University’s Tisch School of the Arts with the CAP 21 Musical Theater Training program. Soon after graduating I was cast in the Broadway production of Fosse.

I have approached this production of Finian’s Rainbow with a fresh set of eyes. My direction and choreography for the CUA production is unique due to the talented group of students I have from the school. For me, directing and choreographing has always been a collaborative process. When I know the strengths and weaknesses of my actors and dancers, I know how best to showcase their individuality. I want to help them develop their character from their own organic instincts and personal experiences, as well as to showcase their individual talents.

This experience has been exciting and refreshing. The actors are so eager to hone their craft, as they are students wanting to apply their newly learned skills. During the rehearsal process I try and approach each rehearsal as a classroom. I feel I am continuing to educate the students about character background, intent, overall objectives and their goals for accomplishing those objectives in both their scenes and musical numbers equally.

For me as a director, I find the more my cast knows about their “on-stage” world and the people in it, the more invested they become in creating and breathing life into that world, every time they step on the stage. I do not believe this to be unique, just my process.

My good friend Tom Pedersen, Head of the Music Theatre division at Catholic University, approached me about directing and choreographing the fall musical at CUA and I was excited about the opportunity to work with such talented students. This time it wasn’t about the piece so much, as it was a chance for me to share my knowledge with the students at CUA. I love sharing my experiences and trying to give back, by encouraging and working with our future generation of performers.

I am so proud of my students at CUA, the work they have accomplished and the growth they have made. They have been dedicated and hard working and I am very proud of their process. At a University level, this is the most important aspect of what I have done here. It is not about the final product, it is about the process and learning development of the students. They are truly gifted; I am blessed to have had the opportunity to work with them and have been continually impressed by their talent.” 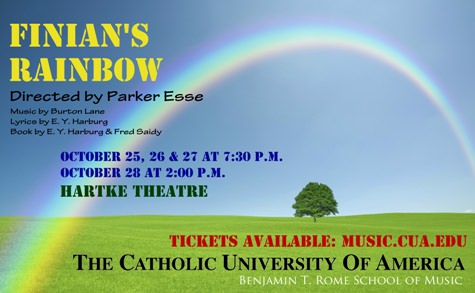