Sit down with a nice refreshing glass of lemonade, grab your burglar gun and shoot your husband. Well, maybe you shouldn’t do the shooting bit, but if you come see Crimes of the Heart, the final production offered in Dignity Players’ 2012 season, you’ll get to see somebody who does! Written by Beth Henley and directed by Lois Evans, this southern classic drama with a touch of comedy is the perfect way to end their season entitled “Love Conquers All.”

Taking place five years after Hurricane Camille in Hazlehurst, Mississippi the story focuses around the Magrath sisters; Lenny Meg and Babe. We find ourselves watching the events unfold from inside old Granddaddy’s house just after Babe has shot her abusive husband. The trio of sisters being raised in a dysfunctional family have their own particular methods for coping with bad days and have a penchant for ugly predicaments. And when past resentments begin to bubble to the surface it only adds to the mixed up madness of current events as they deal with assorted relatives and old relationships amid the chaos of the current upset in their lives. This black comedy won’t drive a nail in your coffin but it will drive you to take a closer look at the dysfunctions in your own family; helping you to appreciate the good times all the more, especially if like the Magrath’s there are fewer of them than the bad ones.

Set Designer Laurie Nolan keeps it simple while ensuring that the audience knows we’ve stepped back to 1974. The little details – the worn out rusted red Coca-Cola icebox next to the battered kerosene lantern, the weathered metal milk crate holder with the empty glass jugs, the tarnished silver percolator atop the stove — each of these little nuances creates the image of a specific time — one long since gone by, but in seeing them we know that’s where our action is happening. Nolan makes the house a cheery one to offset all the doom in gloom in the sister’s lives, with bright yellow wallpaper border trimmings and scribbling of the nephews hung about the walls.

Costume Designer Jeannie Christie gives each sister a defined look to enhance their characters. When we first meet Lenny she looks plain. But when the middle child, Meg, sweeps onto the set, by comparison she looks frumpy. Christie decks Meg — the girl just back from her singing career in Hollywood — in designer chic apparel, painting her face, giving her gaudy gold hoops, heels and hair accessories, whereas with Lenny, Christie uses simple black flats, a long plaid skirt and dumpy looking cardigan. Further accentuating the intricacies of the characters, Christie puts Babe, the youngest sister, in a league of her own with a vibrant buttercup yellow dress complete with red polka dots. Babe is almost always seen running about barefoot, augmenting the idea of her wild and free spirit.

The relationship bonds in this production are the glue of the performance. Director Lois Evans has derived a true sense of family dysfunction among the sisters. The moments when they laugh and share fond memories really displays a sense of kinship and connectivity; as if they were just three children growing up together all along. And when they fight; bickering and screaming at the top of their lungs, shouting in one another’s faces it’s the strongest bout of raw sibling rivalry you could hope to see. Evans also manages to give the show the perfect pace. This show in particular is lengthy but does not feel long as Evans manages to keep it flowing steady and even, never dragging or rushing, but moving along just right so that all the important bits get relayed to the audience.

Outside of the two sisters we find two key characters that serve to add fuel to the fire. The sharp and polished Barnette Lloyd (Seth Clute) shows up as the too-smart-for-his-youth lawyer. His gentle manners when interacting with the Magrath girls, especially Babe, are the epitome of a southern gentleman. You half expect him to bow and offer to escort her to the cotillion during his visits to the house. Clute holds his syrupy slow southern accent with a mellow tone; sounding as if he were a natural born Mississippian.

Then there’s Chick Boyle (Pamela Northrup). The nasty know-it-all cousin with the holier-than-thou complex printed all over her pinched facial expressions. Northrup is a riot; exaggerating her character’s boisterous and obnoxious nature to the point of utter hilarity. Her nasty streak is barely restrained behind that polite southern upbringing and her presence on stage is certainly a fearsome force to be reckoned with; like a mean old hen that will peck at you until you fall down dead.

Lenny (Laura Gayvert) is the oldest sister. She’s subdued and milder than the other two but not without her moments of outburst. When Gayvert finally flips her lid its wild to the level of frightening. Her character’s approach is motherly, and her emotional exposure is just as raw and real as the other two sisters. The spats that she constantly engages Meg in are catty almost to the point of vicious; two sisters at each other’s throats over typical sibling conflicts. Gayvert expresses most of her emotions physically, taking her frustrations out full throttle on menial household tasks, creating a rather amusing performance.

Babe (Lelia TaHaBurt) is a vexing rollercoaster of emotions, particularly in her long explanatory monologue during the end of Act I. TaHaBurt traverses the emotional expanses of elation, confusion, excitement, depression, fear, lust, rage, sorrow, and a few more all during that one powerful scene, her body radiating waves of these feelings out to the audience. Her character almost appears bi-polar as she rolls through episodes of extremely high mania and then extremely low depression. When TaHaBurt’s character hits the highs she’s exploding with enthusiasm, bouncing about as if she didn’t have a care in the world. And when she sinks into those dark and gloomy pits of peril it’s as if she’s literally lost the will to live.

Wrapping up the trio is Meg (Christine Asero). Gussied up like the southern Jezebel they make her out to be, Asero blows into the performance like the hurricane she fled five years ago. Her acting is superior, raw and earthy; grounded in a sense of her own troubles and everyone else’s. Asero’s accent is the most maintained of the three sisters, not too pronounced or overtly false but not so subtle that it goes unnoticed. She finds the proper balance in her characters emotions and interacts well with everyone. It is easy to watch her listening to what is said, having that moment to process it and then respond accordingly; a mark of an extremely talented performer. Asero carries the show in the second act as even she breaks down just a bit, acting like the glue to the family when she does get it together; a rather impressive performer. 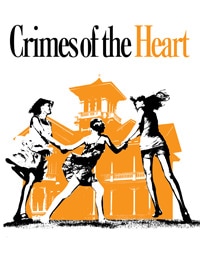 Crimes of the Heart plays through November 3, 2012 at  Dignity Players at the Unitarian Universalist Church of Annapolis 333 Dubois Road in Annapolis, MD. For tickets, call the box office at (410) 266-8044 ext 127, or purchase them online.