Howard University’s Department of Theatre Arts continues its 2012-2013 season ‘Reclaiming the Black Body, Identity, Discourse, and Politics’ with the powerful story of Saartje Baartman in Venus, written by Susan Lori-Parks.

Venus tells the story of Saartje Baartman, a young woman from South Africa who was brought to London in 1810. Baartman’s ample backside was a feature considered desirable in her native society, but freakish to European eyes. Baartman was put on display and won fame as “The Venus Hottentot.” She was taken to Paris where she died at the age of 24. Naturalists in Paris performed a complete dissection, preserving her skeleton, her brain, and her sexual organs which were said to be unique. In death as in life, the body of the Hottentot Venus was put on display. She remained in the Musée National d’Histoire Naturelle until April 2002 when her remains were returned to her native South Africa and buried with full national honors.

Directed by Eric Ruffin (and Assistant Director Daniel Crane), Venus probes into the depths of identity, racism, classism, and sexism through its unique blend of burlesque, choral episodes, poetry, narration, and outstanding performances. Through the use of modern musical references and sentiments, a connection to the continuing issue of the objectification and distortion of the black body is presented. A story from over 200 years ago provides a platform that intertwines with the present day issues of body image and culture.

Michael C. Stepowany’s simplistic yet sleek set consists of a platform at center stage, a backdrop of three entry ways dressed with curtains, and the sides of the stage flanked with sitting chairs. TW Starnes lighting design smoothly coincides with the mood of the play and sets the atmosphere to transport viewers into the traveling journeys and tragic story of Saartjie Baartman (Nedra R. Snipes). Snipes delivers a dynamically moving powerhouse performance as Miss Saartje Baartman/The Venus Hottentot as she invites the audience to experience the pains of a woman who was given false hope, objectified and degraded for the anatomical features of her body.

Other noteworthy performances include that of Edwin Brown III as The Negro Resurrectionist who poignantly connected each scene together though narration, dialogue, music and emotional discourse. Overall, the cast does a phenomenal job shifting into various characters, settings and dialects to present a challenging and disturbing story in history. Actress Lauren E. Banks and Actor Stanley Andrew Jackson III both excel in the daunting challenge of portraying multiple characters throughout the show. From the leads to the chorus, this cast took a vested interest in Suzan-Lori Parks’ powerful Venus. 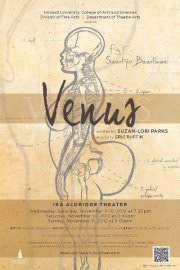 Venus is sure to lead to further discussion on the social constructs of our culture and a story that will force us to take a deeper look at the present day portrayal and exhibition of the woman’s body.

Howard University’s Department of Theatre Arts’ moving production of Venus is a must-see!