“Clang! Clang! Clang! Went  the trolley!” And you’d better jump on quick for the Damascus Theatre Company’s production of Meet Me In St. Louis. Directed by Chad Wheeler with Musical Direction by Mary McConnell, and energetic choreography by Laurie Newton, this beloved musical gets the high spirits soaring as the town of St. Louis, Missouri prepares for the 1904 World’s Fair and the Smith family deals with the everyday incidences of life and love. Getting you into the mood of the play DTC has prepared an assortment of delicacies at the concession stand all of which were sold during the fair including fresh apples, cotton candy, salt water taffy, homemade fudge, apple pie, and more!

Further enhancing the audience’s journey back to the turn of the 20th century are the vividly colored costumes designed by Flo Arnold. Capturing the essence of the era the woman are decked out in their full length lace, even more elegantly so during the Christmas social. Esther’s outfits are particularly stunning, suiting her classy yet youthful character with a bright spirit that accentuates her frame. Arnold uses lace liberally in her designs, further complimenting the nature of the setting.

The musical quality of the show bounced up and down like the infamous trolley ride. At times, the orchestra had a disorganized sound to it; reeds and brass sounding out of synch with one another and occasionally off-key. Conductor Mary McConnell did, however, ensure that they played with amplified volume so that they were heard clearly. The ensemble, though heavily numbered, were often not as loud as such large numbers would indicate and at times – during scene changes when the repetitious melody of the title song was sung – there were segments where voices were dropping in and out of the lyrics as if they were unsure as to whether or not they were meant to be singing.

Vocally there was a jumble of successes and failures. John Truitt (Gabriel Potter) had more issues than most falling frequently out of tune and into ranges that sounded uncomfortable on his voice. Potter floated beautiful poetic imagery in his song “Over The Banister” and he does have a great nervous chemistry with Esther (Ellie Borzilleri) that helps compensate for his vocal shortcomings. Lon (DJ Wojciehowski) had similar vocal issues, but does have a strong voice that carries well in songs like “Skip To My Lou” and “The Banjo.”

A surprising vocal success comes from the youngest member of the Smith family, Tootie (Hedy Hosford). Stealing every moment of the audience’s attention every time she graces the stage with her caricature-esque performance – she melts her way right into your heart. Hosford performs with a boisterous vocal sound during “Under The Bamboo Tree” and simply a fabulous and positively perky young performer. She is particularly adorable especially when stirring up shenanigans with her older sister Agnes (Caitlyn Shea Gilbert). Together the pair make quite a troublesome duo.

While Katie (Rachel Hickson) the house cook and maid may not have a knack for singing her eager effervescence permeates the show with a touch of stereotypical Irish grit. Hickson manages a passable Irish accent and really puts it to good use during “A Touch of the Irish,” while encouraging the girls to give the boys a kick of the blarney. Hickson’s acting talents create a rather amusing series of scenes involving the family as the show progresses. Liz Weber (Mrs. Anna Smith – the matriarch) delivered a heartfelt “You’ll Hear a Bell.”

The singing sensation of the show comes from the leading lady Esther Smith (Ellie Borzilleri). With a voice that frequently channels the inspirational Judy Garland during key moments, Borzilleri has impeccable intonation during every number. She carries both the harmony lines and her melody lines in large group numbers with a passionate ease that allows her radiant personality to shine through. When belting out in “The Trolley Song,” she exudes a glimmering confidence from the depths of her heart straight out to the audience, mobilized on her pitch-perfect songbird voice.

The emotions captured in her songs are stellar and truly drive the show, especially during her heart-felt rendition of “Have Yourself A Merry Little Christmas.” So don’t tell me the lights are shining anywhere but on Ellie Borzilleri – as she carries the show to a dynamic ending. This is a performance well worth riding the trolley to Olney, MD to see. 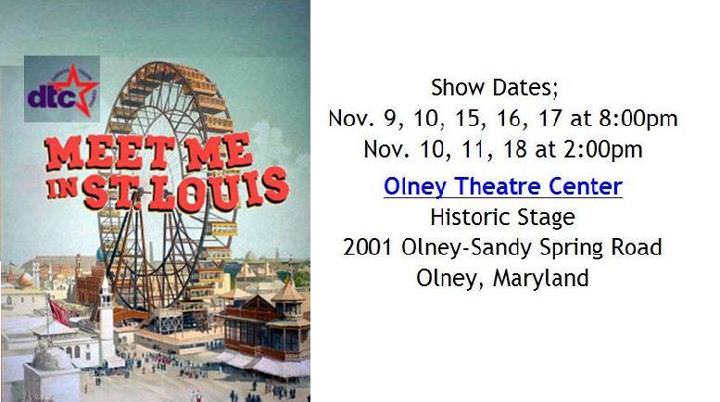