Double Consciousness Redux (DCR){carpel tunnel is something that is going to happen to other people}) begins with a haunting scene in which comes onto the stage assisted by two nurses in white. The moment is creepy and quite well thought out. It is affecting as the obviously strung out Holly Bass is paraded about the stage ending with an odd monologue that leaves you full of questions. I waited for the next scene with great expectations (typically I wait with minimal expectations because beginnings are notoriously difficult to pull off).

There was a strange intermission as the entire set was transformed into the set for a “rock show.” Amps were set up, a backdrop fell, lights were added. I wondered if this was part of the show (and later realized that it was just a scene change {that took a full 5 minutes [thank God the tech guy was cute]}).This led into, what I thought would be a continuation of the original scene  It was, if fact, three totally unrelated songs. They were sung well (but I still can’t quite figure out how they fit into the show).

Then came the bulk of the show, which was (again) totally divorced from the rest of the show (If there was a throughline I was not privy to it {and if those questions that were brought up in the first scene were addressed, I completely missed the answers}).

Holly Bass creates an interesting piece of movement and storytelling. She meshes the two well and has moments of insight and clarity that are simple and beautiful.  But she wanders through the narrative in ways that are disjointed and leave those that aren’t privy to the inside story adrift and hoping for a moment of epiphany that never quite comes (though there are several moments of interesting thought). Mind you, Bass is the type of person that you would love to have a drink with. And she tells her tale almost as though you are sitting in the barstool next to hers.  Unfortunately, on stage, in order to have the impact that Bass was (literally and metaphorically) going for, the voice of the narrator has to guide explicitly (instead of meandering inconsistently).

This is an interesting piece, and the stories are great. Check this out if you have experienced Holly Bass in the past and enjoyed her. You will enjoy her again. If you have never heard of her, you might enjoy the tales that she tells. If you like art for art’s sake, this is a great one. And otherwise this might not be the show for you. 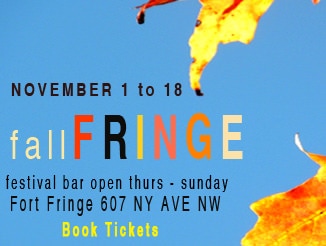