Like its adult (mainstage) counterpart, the Synetic Theater Teen Ensemble clearly has a knack for adapting well-known works of literature, highlighting the salient themes for today, and presenting the material with interesting and inspired style and intense physical movement. The teen’s current production of The Jungle Book, which only plays for five performances, is no exception to this rule. Employing dialogue (a component not usually present in most of the Synetic mainstage pieces), mime, stage combat, and modern dance, the stellar cast of thirteen, under the commendable direction of Joseph Carlson (with consultation from Ryan Sellers and Alex Mills), excels in nearly every way imaginable.

Based on the stories by Rudyard Kipling, this adaptation captures the trials and tribulations of being an adolescent in the 21st century. In this version, the protagonist (Mowgli, played by Alaina Quirk) is a young teenager who doesn’t quite fit in at her urban school. Teased and bullied, she is exiled into the jungle after she takes matters into her own hands. Once in the jungle, she learns a series of life lessons from the animals (namely Baloo, played by Nicole Gianuca) and, after some grueling moments, ultimately gains acceptance within one of the packs after defeating its enemy (the tiger Shere Khan, played by Henry Kramer).

Carlson and his young talented cast (who remarkably helped create the show seen on stage) draw some interesting parallels between today’s urban jungle and the actual jungle and identify how life lessons learned in one apply to the other. No matter the locale, there are still trials and tribulations to endure as an adolescent. Although it’s slightly murky as to why there’s a jungle bordering Mowgli’s city, the plot device largely works in terms of conveying important and universal messages about social acceptance, perseverance, the need for cooperation and teamwork, and the importance of alliance and camaraderie. 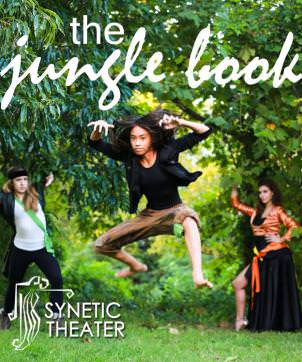 The young cast members are uniformly talented and to be honest, I am in awe of their acting/dance skills, which defy their young ages. They are likely the future of Washington, DC theatre and, their commitment to and understanding of the material far exceeds some professional, adult theatrical productions I’ve witnessed. This play is quite dark and substantial in tone (with moments of comedy interspersed) and the cast handles every moment brilliantly. All of the cast members deserve specific mention.

Quirk is endearing as Mowgli and although I sometimes had difficulty understanding all of her lines due to her soft voice and diction (the actors aren’t miked, but perhaps the ones with a lot of dialogue should be), she more than made up for those technical issues with her body language and chemistry with her fellow cast members. From jumping off platforms, engaging in stage combat, and scurrying down poles, to handling a considerable amount of dialogue, she demonstrates an array of theatrical talents which will take her far in her burgeoning career. Her natural stage presence is noteworthy; she certainly handles the massive role incredibly well.

Nicole Gianuca, as the wise, but slightly awkward Baloo (who teaches Mowgli the lessons of the jungle) has great comedic chops which are likely only to improve with experience. She’s off to a great start to having a career as a character actress. Her joy of performing is infectious.

Two of the very few boys in the cast portray crucial characters that help Mowgli ultimately realize her own strength and purpose. As Akela (who saves Mowgli from Shere Khan and ultimately dies in the process), Nicholas Cadby-Spicer is sweet yet determined. Also a strong mover, he is adept at playing off of his fellow cast members in both the dark and the light moments of the play. Henry Kramer is a force to be reckoned with as the almighty Shere Khan. He makes his presence known with every movement and is perhaps the strongest mover onstage. He’s pretty much a Synetic mainstage leading man in the making.

Alicia Hartz, Carly Greenfield, and Emily Berry take on the roles of Bagheera, Rahn, and Raksha – several major players in the jungle. Their commanding presence makes it impossible to keep eyes off of them. Skillful yet purposeful physical movements make their performances all the better. Delaney Christian, Angelika Goodman, and Garrett Rinker comprise the Bandarlog, the enemies of the pack that Mowgli eventually joins. They are able to portray menacing animals with considerable ease by using their physical agility to maximum advantage. Likewise, the Wolf Pack (Sarah Kent, Sophie Nicholakos, and Jade Uyeda-Trackman) is also comprised of skillful movers who are able to embody these powerful creatures who are loyal, yet fierce.

The production values are just as strong as the cast. The set, originally designed by Daniel Pinha and reimagined by Joshua Rosenblum, transports the audience to a jungle filled with trees and small dwelling places for animals. A series of platforms, poles, and ropes allow the young cast to move freely about the set as animals that can jump, swing, and the like. The costumes range from school uniforms and modern athletic wear, to jungle-inspired/animal-like threads. The combination of the two styles (courtesy of Costume Designer Corey Searless Dunn) nicely emphasizes the similarities between the urban and traditional jungles Mowgli has to navigate in the story.

Tori Bertocci’s choreography is intense, purposeful, and largely influenced by modern dance. When her modern dance elements are coupled with other athletic movements, the result is exceptional and allows the young performers to transform from humans into animals and take on each of their unique characteristics. An eclectic array of music (ranging from rock and Afrobeat to classical music) also highlights the mood of the piece and appropriately backs the choreography.

Though the sound design (Eric Arnold) is minimal for a Synetic show, it does capture ambient sounds of the city and the jungle. The design is well thought out. Andrew F. Griffin’s lighting design is also minimal, but does well to convey the dark and eerie world that is a jungle.

Overall, this show is highly recommended. I urge you to go see the future of Washington, DC theatre!

Running Time: 65 minutes with no intermission.

The Synetic Teen Ensemble’s The Jungle Book plays at Synetic Theater’s Crystal City space – 1800 South Bell Street in Arlington, VA – through November 18, 2012.  For tickets, call 1-800-494-8497 or purchase them online. Tickets can also be purchased at the box office, which opens an hour before showtime.