Imagine a story of a man’s life. Now imagine that it is told by his daughter.  Now imagine that that daughter is hilarious. Got it? Great. That is where we begin this journey. So keep that in mind as we move through this review. 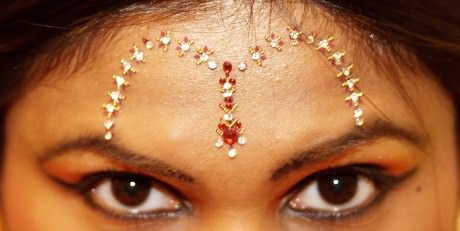 Vijai Nathan is hilarious. It’s that simple. You will laugh your ass off at her show.  She moves through her stories with wit and charm that comforts you into giggling mildly. Then she drops an “F” bomb on you out of nowhere and you can’t help but laugh at the incongruity of it. Then she gives you a one/two punch of religion and atheism which leaves you a little punch drunk. She then drives you back into your corner with sibling rivalry, grandmotherly sequins, and a parade of polarizing arguments made by various family members til the air is electric and your hair is standing on end. And then, when you are completely at her mercy, she touches you gently and you realize that she has, in fact, just torn your heart out. It’s a great show.

So, no show is perfect, but this came close. The only issues were a few moments where the flubbing of a line caused the joke to fall flat (but that will happen occasionally, no matter who is onstage) and the fact that they continued to let people get seated after the show had started (like 10 minutes into the show {in a space where you have to walk across the stage to sit down}). But Vijai kindly introduced herself and asked that they seat themselves and moved on like a pro.

This is one of those reviews where you want to find other things to discuss about the show, but really, you just need to see this. I’m not going to give you a lot of filler here in order to sound smart or educated (or pompous {which is what that always ends up sounding like}), I’m just going to keep it simple. See the show. It’s hilarious. It’s heartfelt. You’ll laugh. You’ll cry. You’ll experience every emotion possible from birth to death (maybe not, but it’s a great quote). It’s better than Cats.  I’m so glad I finally got to write that in a review. Huzzah!