Burlesque. Comedy. Together. Right? Can you go wrong with this? No. Let’s begin with the opening of the room. As people enter they are personally greeted by Justin Purvis. He is not a character, he is just himself and he’s hilarious. He definitely gets the crowd riled up and ready to go. He also has an amazing ability to make people feel comfortable (which is paramount in a situation that involves people taking their clothes off {or doing improv}). As the MC he was a delight and managed to move the show along without grandstanding or trying too hard.

From there we can move onto the Improv section of the evening. Monochromatic was the group that performed at the beginning of both “acts” of the evening. They were quite funny and helped ramp the crowd up even more than they were. The one issue that I had was that it was obvious that they had a time limit. In the second section of improv they had a lovely moment with Jesus that would have been a perfect end to their act, but they kept going and the next skit fell a bit flat. Overall, though, they were fantastic. 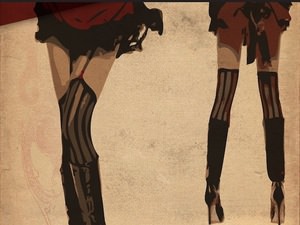 And now The Ladies! They each had something great to bring to the stage, and they all told stories with their dance (This is an intricacy of that artform that has been lost on most for many years {and one of the big differences between burlesque and stripping}). Bella Bijoux prances across the stage quite sweetly. And while she never takes her corset off, she does do a great job of titillating the crowd as little red riding hood. Glam Gams was great as the playful seductress (she played coy better than the fish). Lola Rose was a great presence on the stage. She was so comfortable with her body and the audience that you can’t help but want to dance with her (which Bella Bijoux does in the opening number). Private Tails was the power diva of the night. her version of “Got Them Moves Like Jagger” was not only hilarious, it was amazing! But my hat goes off to Cherie Sweetbottom. Her version of Michael Jackson’s “Bad” finishes the night. She performs it as a burlesque version of the “Honey Badger” (cuz honey badger doesn’t care, honey badger doesn’t give a s%#t). I lost it completely when she started eating the cobra.

Definitely go see this show if you can! It’s great. Unless you don’t like girls taking their clothes off. Or laughing. But if you don’t like either of those things, you’re probably not reading my reviews anyway (so there it is).