Robot Sex. Perfect Fringe show, right? You would think so. And it almost is. R.U.X. is about an embattled businessman named Rockwell. Rockwell Jr. to be precise. His father’s company has been manufacturing “care-bots” that are used to assist the elderly, disabled, and lonely by offering companionship of a strictly platonic nature. Now Rockwell Jr. comes along while his father is in a coma and decides to start making “sex-bots” in order to expand the company’s profit margins. Unfortunately, there is the small matter of a federal law that prohibits the research, development, production, or sale of robotic sexual partners. This is easily overcome by seducing a senator with a prototype “sex-bot” and blackmailing him into changing his vote. That’s when the mayhem starts.

Let’s begin with the fun stuff (and there’s plenty of it). In general the cast is very good. There were a few standouts for me, though. Amy Kellitt lit up every scene she was in with her sweet disposition and shining smile. She slowly grew from a basic machine into a thoughtful caregiver and, ultimately, becomes the hero of the piece. Ricardo Frederick Evans was hilarious in his role as the emasculated (by a remote control) male “sex-bot”. Adam Adkins held together several scenes with his ability to meander kindly through rough exchanges with authority figures and sinister robots. And Momo Nakamura was delightful in both her role as a trashy, Japanese “sex-bot” and her role as the scientist that the robot was a copy of.

Overall, the show is a fun romp with some light philosophical questions asked to add just a hint of depth (though any questions posed by the show could be easily discussed and solved over a beer after the show {but the questions that would develop during that conversation could be discussed for decades}).

Now, there were a few hiccups at this performance. Firstly, lines were being stumbled over at least every five minutes. It didn’t make a huge dent in the show, but it definitely created a few jarring moments as the energy onstage got muddled and had to be picked up by the other actors (fyi: most people have no idea what the technical jargon having to do with robotic circuitry or programming means – so just let the sentence end {no one will be the wiser }). Secondly, this is definitely a work in progress. It is a fun show, but there are moments that need editing and others that need to be fleshed out (when someone dies, for instance, or starts a cat fight, or destroys the entire human race).

The entire second half of the script seemed a bit rushed. Thirdly, the philosophical components of the show are radically under-appreciated. The emotional, social, economic, and moral implications are all discussed quite briefly (like sorority girls trying to sound smart in a bar by reciting something they read on a box of tea) and left me wanting a fuller discussion of the ramifications. And finally, while I can appreciate melodrama, it has its place. This show is funny enough to stand on its own without resorting to over-dramatization. While most of the cast was great, there were a few that I almost called the cops on (and would have if I had seen any more mugging on stage).

Now, let me say, that I really enjoyed this show. It was great and this is one of the few Fringe shows that I would like to see go further than just the Fringe. This show has an enormous amount of potential. Again, while it wasn’t perfect (and no show is) it was definitely worth seeing and, more importantly, worth supporting. I hope you guys go far and find your audience. This is an important discussion that needs to start now. And this could be the show to start that discussion. 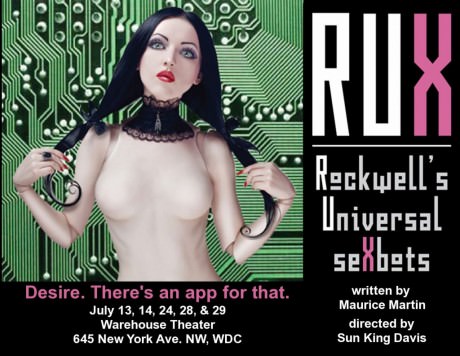 LINK
A preview of RUX at FallFringe by Maurice Martin.