Sisterhood is alive and well and coming to the Carlyle Club in Alexandria.  For two nights only the city’s most sophisticated nightclub will be taken by storm by five rip-roaring tell-it-like-it-is women in Girls Night: The Musical!  The production, written by British playwright, author, and television producer Louise Roche, has toured throughout Britain and the U.S. to rave reviews, with Applause Magazine describing it as “Desperate Housewives meets Mamma Mia.” In it the all-female cast including Anita, Carol, Kate, Sharo,n and Liza, invites gals and their pals to spend a wild girls’ night out, and to sing, dance and sip on cocktails at a karaoke bar.

Director and Production Supervisor, Sonya Carter, whose unique experience as an International Risk Manager for American Express has informed her career, has racked up over 250 performances on tour and Off-Broadway playing one of the women in the production. In a recent interview Carter talked about the show and its effect on audiences.

Jordan: What was the playwright’s original inspiration?

Sonya: Louise Roche saw a musical in London and she saw all these women in the audience laughing and having a good time and thought, “I could do this.  I could reach these women.” It’s actually about five women that she knew. She wrote about her own experiences and as a result she created these five characters that everyone can relate to. She’s really quite brilliant and the show has had great success in the UK playing in large venues  When our producer Tim Flaherty saw it, he went out and purchased the US rights.

How long have you been doing this show?

I’ve been with the show since the U.S. premiere in 2007 in Scottsdale, AZ.

You came from an executive position in the corporate world.  What prepared you for life as a performer and director?

Oh my goodness! Life is life and people are people. Whether you’re in an executive arena or you’re in theatre, it’s all about reading them. My executive experience gave me a lot of patience and taught me to use my words wisely. That is a very good lesson. I reached a point in my life after I had been in corporate for many years when I wanted to do something else and I auditioned for the show and I got the part. For a while I did both.

What are some of the funniest or most heart-warming stories you have heard from audience members after the show?

Every show is different because we break that ‘fourth wall’ between the performers and the audience. You really get a different response every night. I’ve had so many women come up to me afterwards and say things like, “I was battling cancer and this is the first time I’ve laughed so hard that I’ve cried from happiness.” The show is so much about relationships between girlfriends and sisters and moms. People have told me, “I lost my best friend and you were able to make me laugh. You remind me of her.” It’s very heartwarming to be able to impact people that way to make them happy to bring them joy.

How do the cast members prepare before the show? What revs them up?

We’re dealing with a comedy here and the dressing room shenanigans are pretty funny. Most of these girls are naturally funny. In the dressing room everyone has her own routine. Somebody will do a silly dance or play music or do a chant. They really do have to connect, because on stage they’re best friends. These girls travel together, share hotel rooms and laugh and cry together. They really have learned to love each other and all their idiosyncrasies over 20-plus years. It’s really great to see.

Is there any audience participation?

Plenty! But it’s not intrusive. We allow you to speak back, to dance and sing. We throw out boas and give tiaras to some.

Over the years you have played three of the five roles.  Which is closest to your personal experience?

Well, I’m a little bit of each one. But the first part I played was Louisa. She’s always going for the laugh. In that respect I relate to her a lot. Though there are issues Louisa has where I hope I don’t! Kay’s the schoolteacher. She’s shy but during the show she comes out of her shell and really loosens up after a little wine. Anita is the most complicated character. She has such a big heart. I’d like to think that I relate to her loyalty to her friends.

The characters are really universal. Every night people will say, “I am you, or I am her, or my friend is like Carol.” They go on down the line. Sometimes we get large groups of women, moms and daughters or co-workers and after the show they’ll come around and take pictures with the character they most identify with.

Who are your favorite comediennes?

I really like Tina Fey. I think she’s absolutely brilliant. I love her writing. Loved her book! She’s my standout. From the past I like Carol Burnett and Lucille Ball, who I grew up with and can watch over and over again.

Does Louise Roche have any other productions in the works at this time?

She does have a few. She actually wrote a Girls Night Two that’s currently touring the UK. And we are having the US premiere this week of another show she wrote called Big Pants and Botox. It’s a one-woman show that is very poignant and funny and sweet.

What do you want women to experience with this show?

I want women to have a good time to leave the day-to-day things behind and not to worry about tomorrow! To take time for yourself and bring your sister, your mom, your friends to a really great show, because life is really short and you’ve got to laugh!

Is it only for women?

The show has all the great girl anthems like “I Will Survive,” “It’s Raining Men,” “Lady Marmalade,” and more. But men don’t need to be afraid to come. There’s no male bashing. If anything they’ll get a bit of an education. Sometimes when I’m on stage I will hear a man laughing louder than any woman! 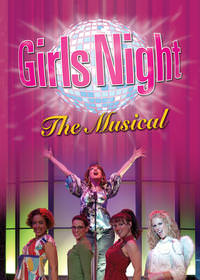 Girls Night Out: The Musical! will be at the Carlyle Club on November 29th and 30th at 8 pm. For tickets and dining information, call (703) 548-8899, or visit their website. There will be a special girl’s night drink menu and dinner service beginning at 6:30 pm.  Street parking is available or adjacent garage parking is $5.00 per car. The club is located two blocks from the King Street Metro.