Every time a bell rings an angel gets his wings. The classic Christmas saying that signals the time for a trip up to cozy Bedford Falls, New York. The story is all there, perhaps not in the order you remember it, all of the characters from good old Hee-haw Sam Wainwright right down to the warped and frustrated old Mr. Potter. The institutions of the town hang down on sign posts from the ceiling — Gower’s Drug Store, Martini’s and even the old Bailey Building and Loan. It’s Frank Capra’s classic captured in a way you never imagined possible as The Hub Theatre partners with Theater Alliance and presents Wonderful Life, a one-man show directed by Gregg Henry. The production, conceptualized by Helen Pafumi and Jason Lott retells the well-known story of It’s A Wonderful Life, using just Jason Lott to fill in the dozen or so characters that George Bailey encounters along the way. A sensationally moving masterpiece, perfect for the holiday season; a real stage gem shining brightly with the true meaning of Christmas spirit.

Seeing this unique stage adaptation of what has become a staple in Christmas time culture around the world is simply astonishing. It is a revelation; a discovery of new secrets in a timeless tale that totally immerse you in the world that Capra created so long ago. It reminded me very much of watching a deconstructed interview or documentary the way the characters were presented; a fascinating look into the back-story of people like Henry Potter and Mary Hatch. Things that we’ve always wondered but were never able to see when simply watching the movie. And each character is presented with such conviction, you would swear Lott had known them all personal, despite them being fiction.

Scenic Designer Brooke A. Robbins keeps the play space simplistic, which really allows the audience to focus on George Bailey’s story and all of the people whose lives he touched. Three main signs; Martini’s Gower’s and The Building & Loan hang above the stage with little street lamp heads dotted here and there hanging beside them; it creates the illusion of the main street in Bedford Falls without having to construct the entire town in the black box space. Robbins heightens the tense moments with the scrim that hides the ‘bridge’ and the Christmas tree.

Sound Designer Thomas Sowers working closely with Lighting Designer Kyle Grant craft an intimate world of life and angels, highlighting character profiles as Lott travels through each person. When Potter is in focus, the lighting is dim and almost smoky — like a seedy back room where an unscrupulous old man might be found in waiting. When Clarence takes to the forefront of the stage Grant baths the stage in muted blue, making him glow with a haunting angelic essence, complimented by Sowers’s chimes that tinkle gently in the background. Together the pair enhance the magic of the production and help define a smooth path between characters.

Lott makes for a stunning performer. Mastering all of the major and minor characters of Capra’s story with his own unique inflections and takes on the roles; he becomes nothing short of brilliant when he presents this one man telling of the story we know all too well. As George Bailey his mannerisms are lit with the spark of enthusiasm — an eternal flame that never dies, his dreams of travel always burning right there in the background. And when he waxes on about the incredible places he will visit, Lott does so with a natural gift for poetic imagery blossoming right from his lips.

All of the key lines and speeches are well represented throughout the production, though not necessarily in the chronological order in which they occur. Lott hits all of the main notes — speeches from George about his father addressed to Potter; one of the most creative uses of manipulating the text as he pulls words from both young George and adult George when doing so. This ability to take the original text and blend it together in such a way that best serves the show is both unique and remarkable.

Lott’s biggest success on stage, aside from bringing these characters to a vibrant reality, is his ability to create several characters on stage at once. When he’s playing as George during the bank run scene and begins to address the masses who are thrown into panic— he does so with such conviction that you can literally almost see each townsperson materialize around him in as a throng of panicked citizens. Lott again masters this technique, though not with a mass but in creating a secondary person on stage with him — when Harry and George are teasing on another and when Bert and Ernie are speaking together; it’s a rather ingenious ability that is executed flawlessly.

His star portrayals, outside of George Bailey — which he does in such a way as to give Jimmy Stewart a run for his money — are the warped and frustrated old Mr. Potter and the honestly naïve Clarence Odbody, Angel Second Class. His presentation of both are as opposite as night and day — as they should be — but more recognizably so as one plays the proverbial devil on George’s shoulder while the other literally plays the angel.

Lott delves into a deeply rooted bitterness to master Mr. Potter; his physicality — crippled by polio — is rigid and stiff, just like his emotions. He extricates the deeper feelings of Potter that we never get to see in the film, making him all the more villainous and downright sinister. But as the southern clockmaker whose gears get gummy from time to time, he’s bubbly and fresh, if a bit worrisome. He restrains his hands behind his back to keep from using them to emote too much, wide-eyed and hopeful as an angel — even a wingless one — ought to be.

Lott is an incredible force to be reckoned with as he plays through no fewer than a dozen characters, each uniquely their own, embodied of the creations that Capra gave us in the film, made uniquely his own with mannerisms, speech patterns, and gestures. His performance is a true holiday blessing and reminds us all of George Bailey’s greatest lesson. Let Jason Lott’s performance touch your life the way George Bailey touched so many others and you too will be the richest man in town. 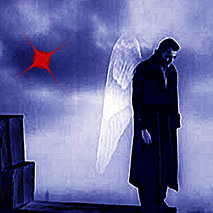