The Keegan Theatre’s An Irish Carol is destined to become one of the not-to-be missed DC holiday institutions that everyone sees whenever Keegan deigns to put it on. This production, the second annual, is a smashing success. Matthew Keenan, an Irish expat from Dublin and a Keegan company member, wrote this ingenious adaptation of Dickens’ classic novella for the company. Artistic Director (and show Director) Mark A. Rhea has made exploring Irish culture one of the core missions of The Keegan Theatre, along with producing great art and ensuring that their art takes a good, honest look at our human condition. He has succeeded with this production on every level.

Pub owner David (Kevin Adams) is dour and angry as any Victorian Scrooge could hope to be, but there are no magical trips to the past or old business partners in chains to knock some Christmas spirit into him. He never leaves the pub and the ghosts that pepper this particular Christmas Eve are very much alive: old mates who know the whole story and new friends who don’t spare the truth. For him, it’s an evening like every other evening, but everything changes.

Though Keenan has tweaked the biographies of the main characters, he remains completely faithful to the spirit of the original and David’s transformation is more moving and hilarious than any traditional telling I’ve seen. It’s hard to imagine we could be knocked on the head by a bunch of ghosts, but it’s very easy to imagine family and friends trying to knock us for the chances we’ve let pass by in life. Like most old mates and certainly any Irish pub, the language is not PG.

The cast is responsible for turning this clever, touching script into an extraordinary piece of theater. Kevin Adams (David) makes the night with his turn as “Scrooge”. He’s not a talkative character and the crucial moments of his performance happen with just a glance. I cried right through the end, mostly because of his performance.

Timothy H. Lynch is funny and powerful as an old drunk who makes for one of the ghosts. The audience laughed every time he opened his mouth and every time he closed his mouth and every time he blinked. David Jourdan, as another old ghost, had a subtler role to play as a man largely satisfied with his life and everything Scrooge is not. Josh Sticklin plays the young Bob Cratchet character, transformed into the bartender. His stage business was impressive, as he was cleaning and pulling pints and running around the entire play. He also does a mean Little Richie impersonation. Mike Kozemchak plays David’s younger brother in a scene that’s more nuanced and effective than the endlessly cheerful nephew of the original story. 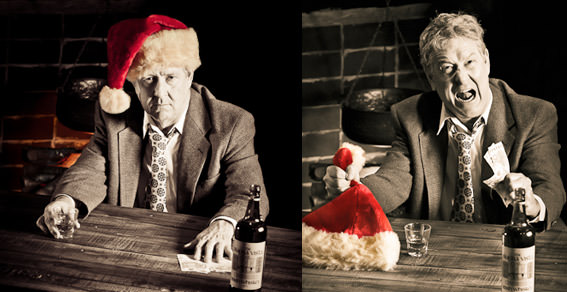 In a further iteration of Dickens’ A Christmas Carol, Mick Tinder plays Richard, the man who married David’s fianceé after she broke it off. A painful but brief moment in the original story becomes key here. Jon Townson and Susan Marie Rhea play a young couple that seems to be echoing David’s path and have come to buy him out. The modern economic problems of Ireland make a good backdrop for this story and Scrooge as eventual mentor is an interesting turn for the character.

Costume Designer Kelly Peacock does an excellent job on the rumpled look of the working class folks. The old man Frank’s pants are a particular triumph; the character would not have been the same without them.

Director Mark Rhea keeps the pace up but also gives these actors plenty of room to play with each other and build up to the final heart wrenching scenes. Rhea also designed the perfect set to look exactly like an Irish pub, from the working Guinness taps onstage to the fireplace to the random instruments strung from the ceiling. Beyond that, the worn wood and the old stools make for a welcome, lived-in feeling, so much so that they could dispense with the play and just invite everyone in for a pint. The lighting design by Dan Martin assists with that, bathing the stage in soft yellows.

If you find yourself in need of a little extra Christmas spirit that doesn’t seem dipped in sugar – but lives on in spite of or perhaps even because of the wreck we can sometimes make of our lives or that our lives can make of us – you cannot miss this play.

The Keegan Theatre’s An Irish Carol is a funny, unapologetic, and an utterly transforming night of theatre.

Running Time: 80 minutes with no intermission. 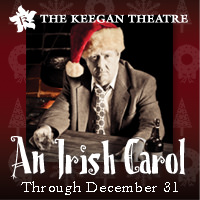