I admit that despite my church upbringing and Christian faith I am not one to want to spend hours listening to Christmas music around this time of year. There’s something to be said about oversaturation. So why did I see Jennifer Knapp and Margaret Becker’s The Hymns of Christmas concert – also known as Hymns and Hits – at The Birchmere last night, you ask? I am certainly a fan of theirs, but even though my distaste for a lot of Christmas music might have kept me away, I knew there was a good possibility that these two very talented musicians would be capable of putting their own spin on the traditional music of the season and make it interesting to me again. Did they pull it off? Certainly; and as an added bonus they also shared some of their greatest non-Christmas hits with the delighted and appreciative audience.

Jennifer Knapp and Margaret Becker may not be household names for the readers of DC Metro Theater Arts, but both have a unique gift of crafting introspective lyrics and weaving them together with intricate and interesting guitar-driven melodies. As solo singer-songwriters, both got their start in Contemporary Christian music (think more rock/blues than bubblegum pop – trust me, it’s not overly saccharine) and received numerous awards for their work in that genre. Knapp has since expanded her musical reach into the mainstream ‘indie’ market, and her soulful and thought-provoking music and lyrics continue to be mainstays.

As their first collaborative endeavor, The Hymns of Christmas album and accompanying tour brings the best of what both singers have to offer as singers and instrumentalists and adds an additional element – beautiful harmonies. Their obvious friendship and admiration for each other’s musical talents certainly made their concert at The Birchmere all the more enjoyable and inviting. Even though both were battling illness, their professionalism, immense musical talent, and rapport with the audience and each other made this concert one to see.

Among the Christmas selections (which thankfully, were of the hymns variety and not inane songs about Santa Claus), three were highlights. Jennifer took lead on the lesser-known hymn “Lo How a Rose E’er Blooming” with Margaret singing some exceptional background harmonies. Their contemplative and melodically-rich rendition of this song was well delivered and although it was modernized a bit, the two thankfully avoided the trap of changing it to the point where it was unrecognizable. There was a nice balance of the ‘new’ mixed with the ‘familiar.’ “Hark the Herald Angels Sing” is one of those songs that I think is overdone, but Becker’s rendition (with Knapp providing back-up vocals and guitar), breathed new life into the song. The folksy-jazz flavoring of the melody was a nice touch. Lastly, the spiritual “Go Tell it On the Mountain” (done as an encore) was a favorite of mine thanks to the rich harmonies on display.

Among the ‘hits’ selections, I was elated that Jennifer brought out one of my old favorites – “Fall Down.” Lyrically, it’s among her most powerful and Becker’s background vocals made it seem new to me all over again. Margaret’s rocking “Soul Tattoo” was also a highlight for her sheer vocal power and intense guitar playing. When combined with Jennifer’s just as powerful voice and guitar playing, it was quite magical indeed. The colors and textures in Becker’s voice are certainly unique and are fundamental reasons why this song works so well. With another voice, it might not be as interesting. Finally, one of Jennifer’s newest songs, “Dive In,” made a welcomed appearance. Her delivery was emotional while being technically on point. 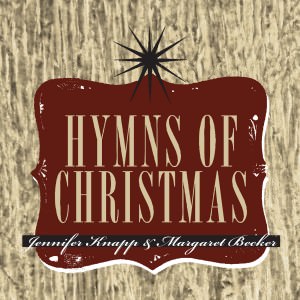 I look forward to what both of these artists have to offer in the future – whether on their own or collectively. Their success in breathing new life into well-known hymns (and for longtime fans, their hits) is certainly deserving of many accolades.

Jennifer Knapp and Margaret Becker’s The Hymns of Christmas concert was one a one-night-only event on December 17, 2012, at The Birchmere – 3701 Mt. Vernon Avenue, in Alexandria, VA. The tour will hit two more cities (Duluth, Georgia and Nashville, TN) before ending on December 23, 2012. Visit Jennifer Knapp’s website for further information. For tickets to upcoming events at The Birchmere, call 1-800-745-3000, or order them online through Ticketmaster.