It was the most electrifying concert of the holiday season. Strathmore was proud to present for two shows only, the Mannheim Steamroller Christmas. An epic concert featuring the unique musical style of the Mannheim Steamroller, an electric-synthetic based band formed and orchestrated by Chip Davis, this show was certainly right on target for making my spirits merry and bright for the Christmas season. Featuring numbers from previous and brand new Christmas albums, the band played seasonally inspiring hits to put the audience in a festive mood.

The projections and light work are what set this concert apart from your normal holiday performance. For every song there was something wildly amazing happening on the screen or up over the stage and out across the house. Lighting Designers Patrick Haines and Richard Jackson crafted incredibly complex designs; whirling snowflakes flittering purple lights and the sensational wavy Aurora Borealis to go with the song “Above The Northern Lights” featured on their album Christmas Angel. The wintery designs were often mixed with a touch of Renaissance influence; be it a scene from a merry court in session with full entertainment, or a knight running rogue on horseback through the green woods of eternity during “Pat-a-Pan.” These designers and projection artists truly made the show both memorable and magical.

I was personally treated to the musical delights of the “Red Tour,” featuring Conductor and Pianist Chuck Penington, Violinist and Recorder Player Jeff Yang, Bass Lute and Guitarist Glen Smith, Percussionist Joey Gulizia and Drummer Tom Sharpe. These five men, combined with the Mannheim Steamroller Orchestra created a daring and brilliant musical concert that was both aurally and visually pleasing.

Their opening number “Hark! The Herald Angels Sing” was played with such intensity that it was like receiving a blast of fresh snow straight from the instruments and out over the audience. And while all of their songs were played with perfection; this song and their super secret closer song were blasted with the full enthusiasm of welcoming the Christmas season to the stage.

Recorder Player Jeff Yang delivered many of the emotional swells in songs like “Greensleeves.” Each instrument played by both Yang and Joey Gulizia (who takes care of the non-drum cage percussion and electric woodwind) comes with a unique passion that is imparted upon the audience in every song.

But the man that truly stole the show was the Drummer, Tom Sharpe. He didn’t let the fact that he’s restricted to one very complex drum set as an instrument hold him back. Fully animated, this performer was astonishing to watch. From his stick twirls and rhythmic playing to the eager movement of his physicality, throwing his full body into the song, Sharpe grabbed my attention for each song. His most breath taking moment was of course “Little Drummer Boy” wherein he became the toy soldier, drumming away with military precision while mixing in elements of unique style and flare to make the experience that much more stunning.

It truly is a magical Christmas with the Mannheim Steamrollers and if you can find them before the roll too far away, they are well worth the investment. 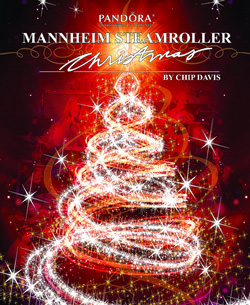