C.S. Lewis’ classic treatise on Christianity, faith, and the failings of the human race, The Screwtape Letters, has been brought to life on the stage through Jeffrery Fiske and Max McLean’s adaptation, currently showing at Shakespeare Theatre Company’s Lansburgh Theatre.

The Screwtape Letters, written early in Lewis’ career (before The Chronicles of Narnia), tells the “other side” of the story. It looks at Christianity through the eyes of Screwtape, an undersecretary in the Devil’s employment. The story is told as a series of letters dictated by Screwtape (Max Mclean), dictated to his secretary Toadpipe (alternating Tamala Bakkensen and Beckly Andrews), advising his nephew Wormwood, a junior tempter on how best to tempt a young Christian man, known to us only as “The Patient.”

The show mainly follows Lewis’s original work, with a few small exceptions. The show opens with Screwtape, addressing a graduating class of the Tempters College. This is actually an abbreviated version of Lewis’ sequel, Screwtape Proposes a Toast. The rest of the time is spent in Screwtape’s office.

Although there is very little furniture in the office, Scenic Designer Cameron Anderson’s set allows Screwtape and Toadpipe to make good use of the props in the room. The hanging mailbox is a focal point of the action in the storytelling and items such as the podium and footrest are all fodder for Toadpipe’s antics. 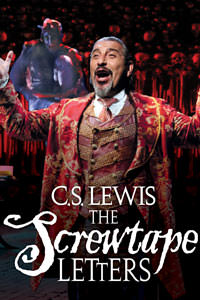 Screwtape continues to advise Wormwood on how to undermine The Patient’s faith and promote sin by soliciting greed, pride, and salacious thoughts. He tries to convince Wormwood that “the safest path to hell is a gradual one.” Let’s just say that Wormwood has one hell of a time.

This adaptation is witty and humorous, but listen carefully and pay attention so you can catch all of Screwtape’s witty humor and biting comments.

What makes this great fun and a success is the impeccable delivery by McLean as Screwtape, and the fascinating performance of Bakkensen as the not quite human Toadpipe. McLean’s performance is wonderful, with just the right amount of perfectly timed sarcasm, wit, and anger. In fact, McLean is so believable, that at the end of the show, he had to proclaim to the audience that “He really isn’t Screwtape!”

The question and answer at the end of the show is also a lot of fun. You can ask questions about C.S. Lewis, about The Screwtape Letters, and get them answered straight from the devil’s mouth – by Screwtape himself…erh, I mean by McLean.

The Screwtape Letters plays through December 30, 2012 at Shakespeare Theatre Company’s Lansburgh Theater – 450 Seventh Street, NW, in Washington, DC. For tickets, Purchase tickets online, by phone at (202) 547-1122, or at the Lansburgh box office.

Get a date for ‘The Prom,’ a hilarious and touching musical at KenCen