I have a confession to make: I first joined the Pallas Theatre Collective family not as a board member, but as a cast member! I was very interested in joining the Pallas board, but I wanted to learn more about what goes into a professional theatrical production. I am a composer, musician and educator by trade, and I have two children who are both working artists – one of whom has enjoyed time working as an actor on Broadway – however, I had never been involved in a theatrical production, and knew little about the process itself.

When Tracey Chessum (the director of Pallas’s upcoming production The Tempest: Such Stuff as Dreams are Made on) approached me about composing incidental music for her production of The Comedy of Mirrorsat the Capital Fringe Festival this past July, she somehow also convinced me that I should experience the theatrical process for myself firsthand. I walked away from that meeting with a small role in the show. What was I thinking?

Let me say that I have never had to memorize lines, remember entrances and exits, figure out what to do with my character’s props, and, on top of all that, react to all that was being thrown at me on stage (You mean to tell me that actors don’t just make this stuff up as they go along?). And, what the heck is scansion? At the end of each rehearsal, I was exhausted! I was forced out of my comfort zone, and, at times, that wasn’t so, well, comfortable.

I take pride in my support of the Washington, D.C. arts community, and have always regarded myself as a well-informed audience member. During this process, however, I realized very quickly that I had no concept of the amount of time, dedication and resources involved in producing theatre. This experience gave me an insider’s view of all that goes into making theatre happen – from the funding challenges, to character analysis, to designs, to the education of young actors just starting out in the professional world (Again…I never understood that ‘scansion’ stuff Mike and Tracey kept trying to teach me). Throughout the process, I was impressed (and, again, exhausted) by the skill level of the artists and the outstanding work ethic of the staff. However, it was their focus on doing right by the artists – the actors, the designers, the technicians – that set them apart. I knew then that Pallas was the type of organization I would continue to support. I want to see the arts, especially the theatrical arts, flourish. I’ve learned over my lifetime that we must support young artists – their education and their experiments – if theatre is to continue to reflect society, its triumphs and failings, for generations to come! This is what I saw Pallas doing first hand; and it was this experience that really sold me on Pallas. This is a company that is really headed for greatness.

In the past year, Pallas Theatre Collective saw the size of its staff triple, the size of its season double, and the amount of people auditioning for its shows octuple! They have also created a new internship program focused on providing young students with direct responsibility for aspects of their marketing, development, production and artistic departments.

As the father of artists, I know the value of this type of internship in the present artistic community. Pallas interns and residents don’t just get coffee, and they don’t just follow their team leaders around – they are responsible for their own areas of production and meet challenges most people don’t experience until 5 years into their careers!

Tracey and Mike (co-Artistic Directors) take seriously their roles as teaching artists – giving interns direction and then letting them apply their knowledge with abandon! Tracey often reminds us that she wants Pallas to ‘stand in the gap’ for these young artists and students just making their way into the professional world – to give them hands-on, practical experience and direct responsibility so that they will have the tools and ethics to be a dynamic part of the theatre community in the future. Pallas will be handing off young professionals with real experience to the theaters of the DC area.

The Tempest: Such Stuff as Dreams are Made on starts Pallas’s third season off with a bang. This show combines all the wonderful elements that Pallas does best – challenging classical work, brand new approaches to familiar ideas, and an incredibly talented mix of emerging and established DC artists. The Tempest is designed, first and foremost, as a collaborative space. A partially-devised work based on a classical text that requires everyone to collaborate, explore, and discover new ways of thinking about, in this case, Shakespeare. 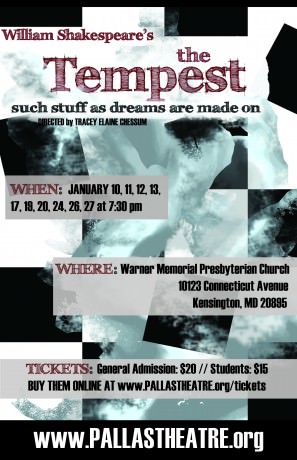 While I enjoyed my foray into acting, I am supporting this production from the safety of my seat in the audience! However, I am confident in my decision to support this young and growing theatre company. As I’ve said, I truly believe that art must be encouraged if it is to continue to grow – it must be given a place to educate itself and experiment with new ideas, away from the constraints of ‘breaking even’ and the production expectations of elite critical response. This is why Pallas, and this particular production of The Tempest, is so important! Without Pallas, and companies like them, productions that focus on educating the next generation and experimenting with new ideas would not be possible. These types of productions represent the forward motion of the art form, its lifeblood. These productions may not have fancy theatrical spaces or technical abilities (The Tempest is being performed a church basement), but they do important work. These are important needs that must be filled if theatre is to continue to thrive in our society. This is why I support Pallas with my time and resources – because the artists I support today will change the face of theatre tomorrow.

We, as patrons and lovers of the arts, must support productions like The Tempest that are meeting needs within the artistic community. So, come see The Tempest: Such Stuff as Dreams are Made on when it opens on January 10th, and, when you do, come introduce yourself. Let me know that you understand that when it comes to art, people and ideas are more important than large production budgets. Come join us, and stand in the gap for those young artists who will shape our society’s understanding of itself for years to come.

LINKS:
Part One of The Tempest: Such Stuff as Dreams are Made on. ”Meet Pallas Theatre Collective’ by Michael Boynton.

Part Two of The Tempest: Such Stuff as Dreams are Made on ‘Views from the Chessboard’ by Tracey Elaine Chessum, Ph.D.