They say when one door closes another opens. The same is true of theatre curtains, theatrical productions and theatre companies. BRAVO@KAT, Theatre for Young Artists, is the newest “kid” on the Montgomery County block and is so proud to be a part of the award-winning Kensington Arts Theatre. A musical theatre program designed for children in grades 3-8, BRAVO@KAT has selected The Music Man Jr. as its inaugural production. It’s “American as apple pie”, says Director Darnell Morris, “and with its classic approach to musical theatre, it’s a perfect introduction to the genre we are so proud to represent – the Golden Age of Broadway.” 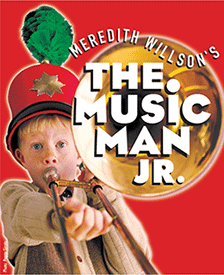 At BRAVO@KAT, students are learning the art of musical theatre from top professionals whose goal is to pass on their affection for this uniquely American art form. “We make sure that the children are having a blast while they learn to work together as a cohesive and supportive cast.  While they are learning the tools of the craft – music, lyrics, choreography, staging and blocking – they are also becoming the next generation who will keep the Broadway tradition alive, if not onstage then as well versed audience members”, said Laurie Levy Issembert, Executive Producer of BRAV0@KAT. “This isn’t about training potential Broadway stars. Show business is a difficult career path and the failure rate is high. Our mission to create a passion for musical theatre in our student ambassadors so that they will always be a part of this industry and continue the American cultural tradition that has brought enjoyment to millions for over 100 years.”

BRAVO@KAT’s The Music Man Jr. is led by a double cast of Harold Hills who are hardly neophytes to the world of entertainment, despite their young ages – and both have a long list of professional credits, from Washington to New York to Los Angeles.

Jake Land, 14, a freshman at Wootton High School has performed in 11 shows previously with Laurie and this is his fourth production with Darnell. His professional credits include working with Shakespeare Theatre Company’s Michael Kahn, as well as roles in NBC’s 30 Rock, Ford Theatre’s A Christmas Carol, Turandot at  Washington National Opera and Round House Theater’s A Wrinkle in Time. Though he has loved his stints with professional companies and looks forward to many more, he relishes also just being a theatre kid among kids.  Jake has previously played Winthrop with Potomac Community Theater and now he has “grown up” to play Harold Hill.

“BRAVO@KAT does a really good job of helping kids feel like they’re part of something truly spectacular. I am very excited to see the future of this amazing company and look forward to many more productions.”

Zachary Conneen, 13, is double-cast as Harold Hill and has just returned from filming his second guest star role on Disney’s Crash and Bernstein, with a long list of other LA television and film credits that include co-starring roles on Community and The Middle. Zack is home-schooled, allowing him the flexibility to live half the year on the West Coast for pilot season. “I was able to use some of the tricks of comedic timing that I had learned with Darnell when playing the Lion in The Wizard of Oz and Lumiere in Beauty and the Beast when auditioning for television series on the West Coast. Darnell’s training has given me the confidence to depend on my instincts when looking for a laugh.”

Appearing for the 10th time in one of Laurie’s productions, Zack remembers fondly his first role as a Wickersham Brother in Seussical. After that, his musical theatre career literally “took off” when he played the role of Michael in MTC’s celebrated production of Peter Pan, in which Laurie’s daughter, Valerie, now a New York Equity actress performing with the New York Metropolitan Opera, played the title role.

One of The Music Man Jr.’s double cast Winthrops, Eli Schulman, at the tender age of 10 and in the fourth grade at Chevy Chase Elementary School, was cast in The Studio Theatre production of Bloody Bloody Andrew Jackson, directed by Keith Alan Baker, this past summer and sailed through the five-week, thirty-six performance run. “Being the only kid in the show, I got a lot of attention! Everyone treated me like a professional. It was a great experience! I learned so much from all the other actors and looked up to them. I felt that Laurie as producer, Darnell as director and Brigitte Emenheiser as music director, really equipped me for my first professional production. I had been through tech weeks and knew how everything worked.”

The other Winthrop, Cole Edelstein, also 10 and in the fourth grade at Chevy Chase Elementary School, was featured in a professionally staged reading of a new musical, SPIN, at Signature Theatre, directed by Eric Schaeffer in September, as well as appearing in a PSA for the American Speech and Hearing Association.

Shira Minsk, one of the double cast Zaneetas is currently at Ford’s Theatre in her first professional role as a member of the ensemble in this season’s A Christmas Carol and she will be juggling all the holiday performances with her continuing rehearsals for The Music Man Jr., which hits the Historic Stage at Olney Theatre Center on January 19 and 20 for six shows. While her “history” with Laurie and Darnell spans 5 shows, Shira reflected “that it is so cool to work at Ford’s because of the history associated with both the theatre and our country.”

Annie Coulson, the double cast Zaneeta, will soon be stepping out in her namesake and the title role in KAT’s Second Stage Annie, Jr. going up at the Gaithersburg Arts Barn in February.

With so much talent in the double cast lead roles and a supporting cast of 31 other young musical theatre enthusiasts with hundreds of production credits between them, The Music Man Jr. promises to be as enchanting as it always is – precisely the reason it continues to be one of America’s most beloved shows.

A very special opportunity is being offered to younger siblings and friends of cast members to appear in the River City Boys Band as their first musical theatre experience. When they appear at the end of the show, it will make you cheer as they toot and blow their instruments, charming you into believing that BRAVO@KAT’s The Music Man Jr is just the sweetest and most adorable production you’ve ever seen.

Contrary to the famous lyrics that have become part of our American vernacular, there is no TROUBLE in River City, there’s only pure delight!