I’ve never been on a blind date, but I imagine it comes with a whole set of crazy emotions, ranging from excitement, to curiosity, to fear, to simply trying really hard not to get your hopes up too high. On the day we were scheduled to have our performers improvise as their characters for the first time, I felt all of those things, waiting to find out who these characters were and who they could become. 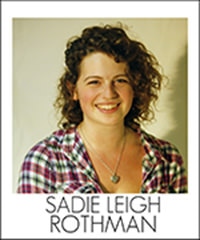 As the Assistant Director for Canterbury, I, along with the rest of the creative team, had done a ton of talking about and conceptualizing of the characters within the show before we began workshops in December. We spent hours, days, weeks, months, gearing up for these rehearsals, planning out how we might help the performers begin to find their character identities. We wondered what sorts of relationships the characters would and should develop, how each one of them would relate to the tales and to the environment we were building for them to inhabit.

I had absolutely nothing to worry about. I should’ve known better, really, this cast is stacked with some of the most talented people I have ever had the privilege to encounter. Sitting in that room, watching these performers improvise as their characters, taking turns interviewing each other, making up their personal backgrounds on the fly, was completely thrilling. During that day of workshopping, these characters that I had written so many little notes about and had discussed at great length, leapt out of my notebook and became people before my eyes.

It’s important to say that the personalities that came out on that first day aren’t necessarily the ones that will make it to the stage when we open in February. They were first instincts, totally improvised, with a slight undertone of trying to “get it right.” And perhaps that’s what a blind date is like, too, with no one completely sure of who they’re supposed to be, and everyone trying to be on their best behavior. But as time passes, you figure out who this person really is, their quirks, what’s important to them and how they interact with the people around them. I for one can’t wait to get to know the characters of Canterbury better, and I look forward to introducing you to them in February.

LINK
Part 1: On the Road From Canterbury to Pointless Theatre’ by Alex Leidy.