“Who could ever love a Siamese twin?” That’s the question I’ve been asking myself since October as I have been preparing to play one half of the dynamic conjoined pair, The Hilton Twins in Drama Learning Center’s production of Side Show. Our Teen Professional Company, TYA (Teaching Young Actors), presents Side Show (opening TOMORROW January 18) at Drama Learning Center, in Columbia, Maryland.

Side Show is being directed by Stephanie Lynn Williams with music direction by Tiffany Underwood Holmes.Based on the true story of Siamese twins Violet and Daisy Hilton, Side Show is a moving portrait of two women joined at the hip whose extraordinary bondage brings them fame but denies them love. Told almost entirely in song, this show follows their progression from England to America, around the vaudeville circuit and to Hollywood on the eve of their appearance in the 1932 movie Freaks.

Nominated for four Tony Awards in 1998, the show made Broadway history when for the first and only time two actresses were co-nominated for Best Actress in a Musical as a team. So far, rehearsing to play a conjoined twin has certainly been a very interesting and challenging experience. Having to maintain the illusion of being physically bound to another person throughout an entire play adds a whole new dimension to musical theatre.

In addition to acting and remembering lines, song lyrics, harmonies, dance steps, and blocking, we have to be constantly conscious of appearing connected to one another, walking in synch, and making sure to position our bodies in a way that one doesn’t upstage the other. Things you don’t have to give a second thought about normally, like walking down steps, suddenly require a lot of concentration.

Playing a conjoined twin poses challenges in the emotional portrayal of the character as well as the physical portrayal.It is important to the story that Carter Grove and I effectively portray that Violet and Daisy are two different people who have very different aims in life, and I think it takes some effort to make sure the audience will understand their separate emotions and will not lump them together just because they are conjoined. I would never have expected I would have the chance to play a part as unusual as a conjoined twin, and though it has been a challenging rehearsal process so far, it has also been a fun and unforgettable experience, and I look forward to continuing to see this great show come together for our opening tomorrow night! 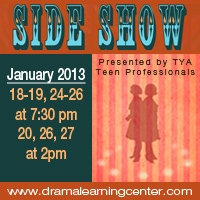 Come to the freak show while I grapple with the question,“Who will love me as I am?”