The  Grammy Award- winning Ladysmith Black Mambazo returned to The Music Center at Strathmore on Friday night. The South African a cappella ensemble transported audiences back to their home in Zululand, telling captivating stories through song and dance about their friends, families, and life experiences. The group — which has been around for more than 45 years — presented their well-known songbook, as well as new pieces from their Grammy Award-nominated album, Songs from a Zulu Farm.

The Music Center at Strathmore publicized Ladysmith Black Mambazo: “Made popular by Paul Simon in the 1980s, Ladysmith Black Mambazo has created a repertoire of more than 40 recordings that marries the intricate rhythms and harmonies of their native South Africa to the sounds and sentiments of gospel music. The group borrows heavily from a traditional music called isicathamiya (is-cot-a-ME-Ya), which was developed by workers in the mines of South Africa.”

Although I was a novice of what isicathamiya sounded like, once the concert began, it all started to make sense. The music is presented entirely a cappella, usually with one or two soloists per song, with the rest harmonizing in the background. The songs themselves are usually based on a singular motif, harmonized and changed slightly with each iteration. Much of their music is inspired by the founder’s conversion to Christianity, and the rich, uplifting sound of their music often reminded me of American gospel music.

Occasionally, the harmonizers would make swift dance moves in unison or gesticulate boldly with hand- or full-body gestures, rhythmically reminding the audience of what the song was about. For instance, a song about young romance might have a quick head bob with an air kiss — giving the audience just enough context to be able to interpret and fully appreciate the music. Dressed in some type of traditional South African garb, the performance required minimal staging and little lighting to keep the audience’s attention; I, personally, remained fixated on their shimmery, rich gold-colored draped shirts.

Although there were only nine performers on stage and the entire production was pretty minimalistic, one aspect that was decidedly richer than expected was the fullness of their sound. Many a capella groups have trouble finding balance between the various parts, but Ladysmith Black Mambazo delivered a performance that was reminiscent of a full chorus. Combined with the outstanding acoustics of The Music Center at Strathmore, it was difficult at times to remember that there were only 9 members on stage. Each vocalist produced a distinct harmony, yet the group was united in the singular sound of the mellifluous harmonies that they produced.

It’s worth noting that, although almost the entire production was presented in a foreign language, what they were actually saying was almost irrelevant to enjoying the experience. The 9 singers on stage would occasionally explain the meaning behind each song before performing it, and hand – and full-body gestures made the underlying message of each song apparent. Though presented in a very specific cultural context, the themes — like love, humor, friendship, nostalgia, jealousy, and rivalry — were pretty universal and recognizable in the rhythms, harmonies, and gestures. Needless to say, it was a humanizing cross-cultural experience. 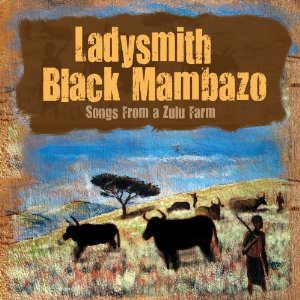 I was delighted to leave the performance a Ladysmith Black Mambazo fan. The fact that they won 3 Grammy Awards (and were nominated for 15 other awards) is a testament to the way in which their music pierces the soul and transcends cultural barriers. The fundamental essence and spirit of Ladysmith Black Mambazo music is universal.

Running Time: One hour and fifty minutes, plus one intermission.

Ladysmith Black Mambazo performed for one night only on January 25, 2013 at 8:00 p.m., at The Music Center at Strathmore – 5301 Tuckerman Lane, in North Bethesda, MD. For upcoming events, please check their calendar.