FELA! is perfect pleasure for your senses! From the moment you enter the theatre, the sounds of the pulsing drums and Afrobeat rhythms envelope you and draw you into another time and place. That time and place is a concert in The Shrine circa 1987, Lagos, Nigeria. Here you will learn the story of legendary Nigerian musician Fela Kuti (Adesola Osakalumi), who used his music to form a movement designed to empower a suffering society and change a corrupt and oppressive Nigerian regime.

Adesola Osaklumi commands the stage with his presence as Fela Kuti. The moment he enters the stage and starts addressing the crowd, you feel that Adesola is embodying Fela and bringing him to life in a seamless, natural and powerful way. His performance was engaging and a complete pleasure from beginning to end. In this musical, you will learn that Fela was greatly influenced by his mother, Funmilayo (Melanie Marshall) a civil rights activist in her own right and an important part of his story.

Shining in her role as Funmilayo, Melanie Marshall’s performance is captivating and her singing exceptional. In the “Rain” number, her vocals are given a chance to show off an amazing range and hits a performance note that produced goose bumps and thunderous applause. Visually, her presence on the stage was artful due to a combination of excellent scenic design (Marina Draghici, who is also the Costume Designer), lighting design (Robert Wierzel) and projection design (Peter Nigrini). These designers’ work throughout the musical is stunning and other sets that highlight their talents are the musical numbers in “The Storming of Kalakuta,” “Dance of The Orishas,” and “B.Y.O.C (Bring Your Own Coffin).”

Another important influence in Fela’s life was Sandra Isadore (Michelle Williams). Fela meets Sandra in America and we learn about their story in “Lover” and “Upside Down.” Michelle Williams embraces her role as Sandra Isadore and her portrayal of Sandra was quite enjoyable. Her treatment of Sandra was respectable and honorable. It was a treat for me to see Ms. Williams perform on stage in a different capacity from her role as a recording artist.

The beautiful ensemble cast of dancers also played a vital role in communicating powerful emotions and storylines. Brilliantly choreographed by Bill T. Jones (and Director), they were skillful in execution and exuded great energy. Adding to the great dancing, were the great costumes designed by Marina Draghici (and Scenic Designer). 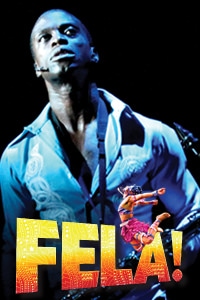 Now, let’s be honest, the entire production would not be what it is without the musicians. The band is sublime. The sounds they produced moved me and will stay with me for a long time. They are a large reason behind why FELA! is full of juicy goodness that can’t be missed.

I am so grateful this production of FELA! is back and that I got the chance to see it. Do not miss your chance to see this marvelous musical, that is, if tickets are still available.

Running Time: Approximately 2 hours and 30 minutes, with one 15-minute intermission.