The last local production of Jesus Christ Superstar I attended was Open Circle Theatre Company’s acclaimed 2004 production. It boasted a brilliantly original concept and some of the region’s most gifted actors; regrettably, however, it left me longing for a production with singers who could better handle the vocal requirements of the score. Thankfully, director/conductor Douglas Brandt Byerly and his team at Anne Arundel Community College have answered my prayers with a Superstar that elevates the music above all other elements.

Many directors insist that a strong actor will always trump a legitimate singer in musical theatre performance (one can almost hear the argument that must have ensued between composer Claude-Michel Schonberg and director Tom Hooper over the casting of the recent Les Miserables film), and while I am sometimes inclined to agree, one glaring exception would have to be Jesus Christ Superstar. It’s well nigh impossible for an actor to “fake” through this rangy rock opera, whereas Andrew Lloyd Webber’s score essentially forces a singer to emote through sheer vocal demands, from the paranoiac tenor wailing of Judas to the steely bass drive of Caiaphas.

Brandt Byerly presents a concert staging of the rock opera, seemingly a tribute to the original concept album and 1973 film. Michael Kilma’s biblical costumes are reminiscent of a church Christmas pageant, but it’s all good, because the combined forces of 70‘s rock and Tim Rice lyrics lend themselves to a modicum of cheese.

In Robert Bradley, breakout performer of Baltimore Rock Opera Society’s 2012 Valhella, we have a dream Judas. He brings a legitimate metal frontman’s sensibility to the role, and lands all four of Judas‘ big songs with effortless rock falsetto and soulful vocal interpretation. His characterization oozes malice, registering somewhere between Richard III and a Sith Lord, which seemed perfectly ok with Sunday’s audience of church-goers.

As Jesus and Mary Magdalene, Benjamin Lurye and Emily Sergo take a musical theatre singer’s approach to vocals, but deliver similarly glorious performances. Lurye understands the power of stillness. His soaring rendition of “Gethsemene” is the musical highlight of the production, and you can feel the audience’s disappointment that Brandt Byerly opts for a quick segue to preserve dramatic momentum rather than allowing applause after the song. Lurye doesn’t always sell the inner torment of Jesus (frankly, I chalk that up to concert staging, janky wig, Christ-muumuu, etc.), however, and while Lurye and Sergo improvize impressively on the classic riffs, their inspiration seems more often drawn from the head than the heart. It is difficult, if not downright irresponsible, to express to young actors today that the original casts of Superstar didn’t have Juilliard training, they had LSD.

There are many standouts in the supporting cast: Greg Baron reveals a warming, rich baritone as Peter; Anwar Thomas exudes gospel soul as Simon Zealotes; Peter N. Crews turns in a commanding and engaging Pilate; and Christopher Leabhart provides much appreciated comic relief as a swishy King Herod.

The real star of this production, however, is the chorus (prepared by Eleanor Minor). Costumed only in basic production tee shirts, this ensemble of all ages fills the room with an ocean of harmony. They invoke all the choral thrills and chills of the original concept album, and Brandt Byerly’s simple staging of the 39 lashes is one of the most powerful I have ever seen.

Opera AACC’s production definitively proves that when it comes to Jesus Christ Superstar, quality musicianship indeed trumps acting, concept and design in performance. Like one who awaits a proverbial Messiah, however, I still hold vigil for the day when a local production will fully capture both the musical and dramatic nuances at once. 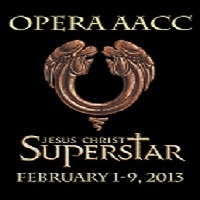