Spooky Action Theater has wrapped their creative story telling capabilities around Haruki Murakami’s mysterious, dream weaving story Kafka On The Shore. Adapted by Frank Galati and wonderfully directed by Rebecca Holderness, this play is an intellectually engaging look at the unexpectedness of life, the nature of fate, and the importance of dreams.

Kafka On The Shore follows the non-stop convoluted journeys of Kafka (Michael Wong) a teenage wonderer on a soul searching mission and Nakata (Al Twanmo) –  a kindhearted man who faces every challenge without his fair share of wits, but instead has the ability to speak to cats. As Wong and Twanmo progress through their stories, we see an honest portrayal of emotional responses to situations one would be hard pressed to imagine themselves in.

Kafka starts his journey with the emotional encouragement of Crow (Dane Edidi), a lyrical real world manifestation of his psyche. Through chance or fate he is guided by Sakura (Jennifer Knight who also plays Ms. Soga & NHK Announcer) and the kind librarians with whom he finds shelter with. Manager Miss Saeki (Mi Ran Powell) is both powerfully sensual and poignantly sad while librarian Oshima (Tuyet Thi Pham who also plays Dr. Nakazawa) is both intelligently reassuring and hilariously honest about life.

Wonsup Chung as (Tall Soldier & Police Officer) and Jon Jon Johnson (Brawny Solider/Dog) didn’t stay on stage long, but both made their presence known to the audience with unique and memorable character traits that put a smile on many audience members’ faces. With such a well-rounded cast, it’s no wonder Spooky Action Theater decided to be ambitions and present Kafka On The Shore’s first East Coast performance.

Set Designer Brooke Robbins has managed to capture the essence of Japanese culture in the complicated set that looks misleadingly simple. With just a drop of a light and the shift of a panel, the stage effortlessly transforms into whatever world we need to step into next. Lighting Designer Zachary A. Dalton plays with both light and shadows to help set each scene for the perfect emotional impact. Costume Designer Sara Jane Palmer uses traditional Japanese design with a modern, fluid look that helped the viewer latch onto something visually comforting even as the thought provoking story flies by.

Though slow at times, the cast manages to quickly work their way through the exposition’s heavy dialogue, but overall Spooky Action Theater successfully brings Murakami’s world of spirituality and imagination to life.

Kafka on the Shore is a stunning and intellectual piece that plays with the concept of dreams, reality, and our connection to the human spirit. 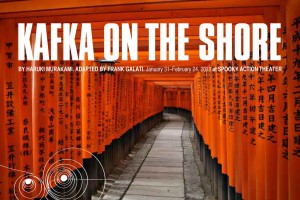