If you’re ready to find your groove, and get your bubbly on than The Bubby Black Girl Sheds Her Chameleon Skin is the musical for you. A co-production between StillPointe Theatre Initiative and Strand Theater Company this uplifting musical brings to life the importance of being true to one’s own identity. Quoting Artistic Director of Strand Theatre Company, Rain Pryor, “…a chance to put race in your face and on the table…” this production is packed full of powerful voices, amazing musical numbers and a sensational feeling that will lift your spirits and let them soar with passionate discovery. Directed by Ryan Michael Haase, this musical inspires its audience to be true to themselves and release their inner bubbly. 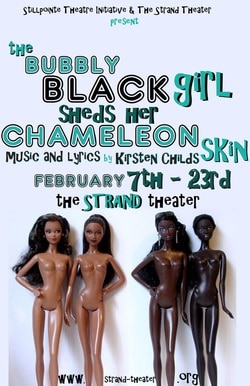 Doubling up as the Set Designer, Haase brings a uniquely discombobulated feel to the set. Just simple black chairs and wall murals to transport you out of the black-box style space of The Strand, but it’s enough to take you worlds away and into the world of Viveca. The wall paintings are lively even in the absence of color and add to the overall jazzy and soulful feel of the production.

Costume Designer Anna Tringali gives the audience some eye-popping notions with her outfits. Both versions of the Chitty Chatty doll have elegant doll dresses that are torn in places with stuffing popping out to complete the illusion of the actors being little more than stuffed playthings. And Bubbly, as Viveca is often referred to throughout the performance, is kept in simplistic clothing to allow her personality to shine above all. Tringali keeps a similar motif for the rest of the ensemble, giving them accentuating pieces— like the head wrap for the mother and the swanky fedora for the sleazy love interest— to allow the character’s portrayal and voices to speak rather than tangling them up in heavy costuming.

Haase has gathered a wealth of talented voices for this production; perfect harmonies blending during the ensemble numbers. Every group number was vocally explosive; a positively powerful sound resonating from the ensemble. Their voices were passionate, expressive and above all clear; making every note ring true and each word understood. Numbers like “The Stake” and “Who’s That Bubbly Black Girl” result in thunderous applause from the audience, showcasing the ensembles ability to emote while singing. The ensemble provides a myriad of vocal versatility, especially during songs like “Sticks and Stones” where they add a harrowing and creepy sound to their performance simply by tilting the wavering pitch of their voice and softening their lyrics into hushed whispers.

There are a series of solo performances whose voices heighten the stupendous production because of their sheer force and sound quality. One of those performers is Krista Forney, playing the role of one of Bubbly’s friends, the ‘other’ Chitty Chatty doll but most importantly Harriet Tubman. Although Forney’s appearance as Tubman occurs in a dream sequence and is brief her vocal prowess commands the attention of the entire stage during this moment, occurring on the tail of “Sticks and Stones.”

S. Ann Johnson takes on the roles of Emily and the hilariously wise role of grandma late in the second act. While playing Emily Johnson displays a sharp attitude and shows off her soulful belting ability in “Give It Up.” When portraying the grandmother her vocal power is matched, shouting to the rooftops with crazy ‘good’ advice in “Granny’s Advice.” All around Johnson is a brilliant addition to the hearty ensemble of voices.

And then there’s Chitty Chatty (Nina Kauffman). The deranged little dolly that comes across as quite frightening at times, Kauffman delves into the role of the talking toy with a strong sense of balancing vocal clarity and emotional zaniness. She exudes a fun and funky rhythm for her clapping games during “Sweet Chitty Chatty” but then flips dynamically into a cuckoo-bananas routine that delves deep into the maddening darkness of lunacy just a few scenes later. Kauffman’s performance embodies derangement as well as sweetness; a bizarrely rewarding combination.

Every bright young girl has parents and Bubbly is no exception. Mommy (Jacquelyn Clemmons) and Daddy (Jay Hargrove) lend their voices to reason and hope in this production. Clemmons has a pure of heart quality to her singing voice, tempered with reason and faith during her duet with the lead, “Brave New World.” And Hargrove his pitch perfect vocals when he sings “Smile, Smile,” a song which inspires optimism and faith for Bubbly to stay strong even when things look bleak.

Hargrove later portrays the slick lover Lucas, a smooth jazzy quality to his voice during “Come With Me.” He balances sensuality and sexuality in this solo whilst dancing in the shadows and letting his body channel what his voice leaves behind. It’s a definite change from the crisp clarity of his fatherly role, his voice adapting an unctuous quality that melts its way to the audience’s ear with ease.

And a for little Miss Bubbly herself, Viveca (Ines Nassara) she is the epitome of her namesake. Starting off with an exuberant energy that could easily outshine the sun, Nassara lets her body and her voice display her lively passion that’s literally bubbling up from inside of her. Her sheer enthusiasm is contagious, driving the ensemble to higher heights as she bounces about in numbers like “Welcome to My L.A.” Nassara owns “Legacy” with her soul blazing bright through her voice, determination echoing in her physicality as well. And by the end of the production she has completely changed her persona, finding the deep originality of the character underneath all she has built her up to be. The emotional depths that Nassara achieves in this role are impeccably matched to her vocal talents and she truly is worthy of great praise.

The Bubby Black Girl Sheds Her Chameleon Skin is a production that is a radiant beacon of hope and truth for individuality and self-honesty shining into the darkness of our lives. It should not be missed.

Running Time: One hour and 50 minutes, with one intermission.