“Joseph he was one of Jacob’s favorite sons,” are the words of the lead song of Joseph and the Amazing Technicolor Dreamcoat, and they were meandering around in my head as I walked up the steps of the theatre on Valentines’ evening. This must have been the 10th time I have seen the show. My expectations were already high…yet I still had no idea how this 25 member gender-neutral production would be embraced by the audience. This is the 17th production by Chalice Theatre, who performs at The Unitarian Universalist Church of Arlington, VA.

For those requiring a history lesson, the show began in London in 1968, opened on Broadway in 1982 and the movie was released on DVD in 1999. Yes, this is one of those musicals where all lyrics are sung-through with no spoken dialogue just like  Evita, Jesus Christ Superstar, The Phantom of the Opera, and Les Miserables.

Believing that variety is the spice of life, we have a broad musical spectrum to experience during the evening including calypso, disco, rock-n-roll, cowboy, French chanson, and more. How could tonight’s performance be both unique and different from the other productions I have seen before? Yes, theatrical magic evolves under the lights tonight due to the skillful and capable hands of two ingenious co-directors: Randy Snight and Elena Velasco, who together provide a memorable evening of enjoyment.

If you are ready to let your imagination fly and be available to digest a unique production of this Andrew Loyd Weber classic, please return with us now to “Those Canaan Days.”

For those who need a quick study before attending, check out Genesis, Chapter 39, of the Old Testament to remind yourself  what you are about to witness tonight.

Chalice Theatre has produced a charming production that utilizes the 37 colors identified in Joseph’s dreamcoat to represent various settings within the play. It’s also complemented by ribbons, human mirrors, puppets, and a group of 12 boys and girls from age 6-17, who portray the 12 brothers in this triumphant exhibition of exuberance. Musical accompaniment is provided by Music Director Barbara Schelstrate on the piano, along with Maestros Bob Kline on keyboard, and Pete Nuwayser on percussion. Together they accomplish something wonderful – they don’t overwhelm or drown out  the actors, and provide beautiful accompaniment.

Cynthia Young, who portrays the narrator, is no stranger to the Chalice Family having performed in four previous shows. She sings the role beautifully as she introduces the numerous characters and plot changes with perfect diction.

The role of Joseph is divided between two individuals….a young Joseph played by Liza Harold – and after being captured by Ishmaelites  – a much older Joseph now played by Kylie Cohen. Both display the necessary charisma for playing Joseph. As I think back about the night’s staging, any patron would be very much taken in by the 12 brothers. These young actors steal the show and win the hearts of the audience,

After the show ended, I spoke individually to the directors, Randy and Elena, who shared the mantel of directorship by taking responsibility for different parts of the show. I spoke earlier of the utilization of mirrors where Joseph studies his stature while putting on his dreamcoat for the first time. The reflections in the “mirror” are portrayed by cast members…something I have never seen before and a quite ingenious approach to capture the audience’s attention. As Joseph’s brothers are given food to take back to their father Jacob, each bag utilized is from either Safeway, Trader Joes, MOMs (My Organic Market) and Giant bringing a local sense of identification to what’s transpiring on the stage. Randy believes that Joseph is indeed a reflection of hope and optimism. “It’s a story that teaches kids that they can do anything as well as be the necessary windows to connecting with the audience”.

“Go, Go, Go” now across the river and through the woods and find out why “Any Dream Will Do” before Chalice Theatre’s colorful production of Joseph and the Amazing Technicolor Dreamcoat closes on March 3rd. 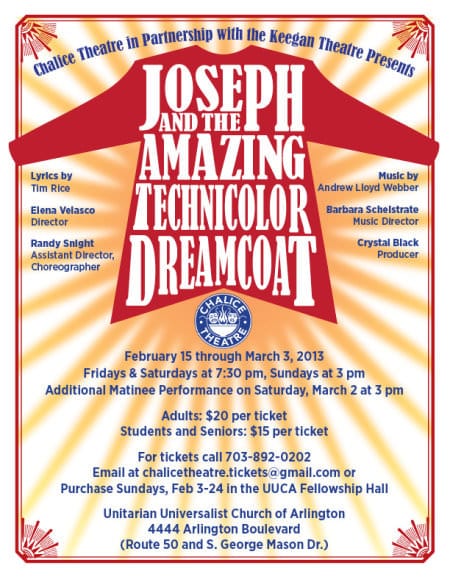 Running Time: 90 minutes, including one intermission.