There is no annual holiday celebration in Louisiana without Mardi Gras! According to historians, Mardi Gras, a one-day prelude to Lent dates back thousands of years to pagan celebrations of spring and fertility rites. A national holiday only in Louisiana, its popularity continues to draw tourists from all fifty states as well as abroad. Modern day festivities include music, dance, extravagant spectacles with huge floats, glittering balls, family oriented picnics and touristy overflows of Bourbon Street.

But one need not travel to New Orleans, the undisputed birthplace of jazz, to enjoy Mardi Gras. Local music lovers were treated to a festive evening of solos, trio compositions and swingin’ big band tunes on Saturday, February 16, 2013 at George Mason University’s Center for the Arts, in Fairfax, Virginia. The Metropolitan Jazz Orchestra (MJO), under the stellar direction of Mason’s Artistic Director, Jim Carroll (alto sax), celebrated jazz with first-rate musicians from the D.C. area performing a compilation of blues, ragtime, funeral dirges, and worship music. Drawing enthusiastic ovations for their interpretations of the great jazz classics, the MJO’s selection of songs maintained a nice balance between big band sound and smaller orchestra ensembles. 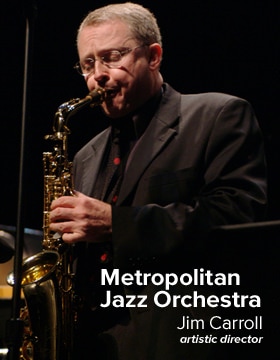 Among the first set was a nice, bouncy upbeat strut, “Down in Honky Tonk Town,” which evoked visualizations of a colorful parade, sun shining through blue billowy clouds, and everyone having fun—little kids, teens, parents, old timers—even the dog and the cat. I enjoyed the rhythm section’s superb musicianship on this piece. Following that, a big band song, “Struttin’ With Some Barbecue” paid tribute to Louis Armstrong and spotlighted the sweet notes of Ben Patterson’s trombone. Another big band song, “Back in Blue Orleans,” featured a guitar solo by Rick Whitehead, and a saxophonist not identified. It was a great piece and the audience showed strong appreciation for the rendition.

Guest solo vocalist Dr. Darden Purcell, of Washington, D.C. Air Force Band notoriety, was a pure joy to listen to. Her husky rendition of “Do You Know What It Means to Miss New Orleans?” was flawless as was her five star performance of “Halleujah I Love Him So.” Another solo and spotlight performance, a funeral dirge and original composition written by Dr. Michael Nickens, “A Rapturous Parade,” in tribute to the New Orleans flood survivors touched the hearts of many in the audience. Trumpeter Dave Robinson, a thirty year veteran of jazz, also directed the Capital Focus Jazz Band during its pre-performance and artfully led the band, composed of seven college students, and a young 14 year-old pianist, Elijah Cole, played his first gig! The students played “St. Louis Blues,” which Mr. Carroll stated was the most recorded tune in the history of blues.

The audience was invited to follow the “second line” (a New Orleans brass band parade tradition) at intermission, complete with decorated umbrellas, hats and masks all of which were enlivened by the musicians using ornamented hats as cups while playing their trombones and trumpets.

The stage setting was Spartan, a plain painted wall whose hue changed periodically from deep blues, purples and greens, to bright reds and oranges. The minimalist style worked well, allowing full attention on the artists themselves. Microphones were a small problem and at times it was difficult to hear the names of musicians whose names were also not listed in the program, thus I was unable to give full credit to individual artists. Overall, the Center for the Arts is a beautiful space and the entire venue benefitted from it.

Mardi Gras with the MJO played Saturday, February 16, 2013, at George Mason University’s Center for the Arts – 4400 University Drive, in Fairfax, VA (the intersection of Braddock Road and Route 123). Check their calendar for future events.

PLEASE NOTE: The MJO will perform again at Mason’s Manassas campus in the Hylton Performing Arts Center on Saturday, March 30, 2013 at 8 p.m. Titled The Gospel Truth, the performance will feature pianist and organist Bobby Floyd as special guest artist. Purchase future tickets in person at the Ticket Office-Fairfax campus, online, or by calling Ticketmaster at (703) 573-7328.