Rolando and Kristofer Sanz are gearing up for Young Artists of America’s upcoming Madama Butterfly and Miss Saigon joint concert with Maryland Classic Youth Orchestras on March 10th at 4 PM. 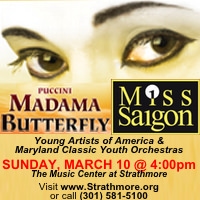 Joel: Young Artists of America (YAA) has a big performance coming up on March 10th at 4 PM. Tell us about it.

Rolando: On March 10th at 4:00 pm, Young Artists of America will be making our Mainstage debut at The Music Center at Strathmore with a unique program entitled Madama Butterfly & Miss Saigon. This program will feature highlights from the timeless opera Madama Butterfly and the musical which shares its storyline, Miss Saigon. This semi-staged concert, staged by Shakespeare Theatre Company‘s Associate Director, Alan Paul, is a collaboration with Maryland Classic Youth Orchestras and will involve over 130 of the brightest young instrumentalists and singers in the Metro DC area, as well as professional opera singers and costumes from Washington National Opera.After our wildly successful premiere of The Phantom of the Opera last spring, we knew that we had to present our students and audiences with a unique concept this spring, and we are thrilled to be able to bring these two iconic scores together to tell the heartbreaking story they share, all while still keeping to our mission at YAA of exposing our young students to repertoire they would not otherwise experience. It is truly humbling to be given the opportunity to present this program at Strathmore in only our sophomore season.

Kris, congratulations on being selected by DC Metro Theater Arts for Best Musical Direction of a Musical Play in 2012 for last year’s Young Artists of America performance of The Phantom of the Opera! How did you choose to present a combined performance of Madama Butterfly and Miss Saigon?

Kris: Rolando and I had been brainstorming for some time for a way to bring together opera and musical theatre scores based on the same storyline.  However, the only way to be able to do this right is on a large scale. When MCYO approached us to collaborate at Strathmore, Madama Butterfly and Miss Saigon immediately jumped into our heads!

We are extremely pleased that in such a short time, Young Artists of America has not only become known for our educational programming, but also for our innovative and creative artistic programming. One of the reasons that MCYO approached us is because of the unique concepts that we are able to present. We strongly believe that the classical music world especially must continue to adapt to encourage audiences to come to live performances.

Madama Butterfly and Miss Saigon are a natural pairing when bringing together the worlds of opera and musical theater. Besides the plots following the same storyline of a young girl left to raise the son of her American love, the scores share similar musical themes and textual images. I think the audience will be quite surprised in hearing how similar the scores really are!

One of our goals at YAA has been to show our students that opera and musical theatre are really not that different, even though they are perceived as worlds apart. Our hope is that when presented with the pieces side by side in performance, audiences will also see that this is true.

How did you merge the stories and the scores?

It may seem that with Madama Butterfly set in 1904 Japan and Miss Saigon set during the war in the 1970s, that the two pieces may not have much in common. What’s amazing is that the two scores, although written 85 years apart, still move us to tears with their heart-wrenching tale of love and sacrifice.

The concert will feature highlights from both scores, tied together by the plotline they share. The haunting story is of a young girl (Japanese in Madama Butterfly and Vietnamese in Miss Saigon) who falls in love with an American soldier during wartime and has his child after he returns home. In both stories, the soldier returns three years later to the news he has a son, and the child’s mother, upon learning her beloved has a new American wife, takes her own life so that their son can live in America.

A lot of work was done by Rolando, Alan, and myself over the past year to choose music that would not just tell the story but also feature our excellent students and professional soloists as well as really challenge and feature the MCYO orchestra members. With this collaboration with MCYO, we have the luxury of working with 85 of the best young instrumentalists in the area. Such a collaboration needed to expand the challenge usually posed to these instrumentalists. This project requires them to play not just tough licks from a musical theatre score, but also some of the greatest orchestral writing Puccini composed in Madama Butterfly and to listen to singers as they play. We are teaching them that their responsibility is not just to play the notes, but to create a theatrical atmosphere with their playing and to advance the story with how they interpret the music.

How did the collaboration with Maryland Classic Youth Orchestras come about?

Rolando: The Executive Director of Maryland Classic Youth Orchestras approached us after The Phantom of the Opera last year about a possible collaboration, as they were looking to expand their programming and to expose their students to different kinds of repertoire. Kris and I had already been talking about coming up with a large scale program that combined opera and musical theatre for orchestra and singers, however, bring a young nonprofit organization, we obviously did not have the resources to do a full blown production alone, especially on a stage like Strathmore. Once the concept of the concert was approved by both organizations’ Boards of Directors, and the dates aligned for this March, we knew it was meant to be.

Especially in today’s economic climate, we believe strongly that non-profit arts organizations need to work together – not only survive – but to continue serving our students, while still maintaining the high artistic quality that everyone has come to expect of us. This is definitely a project that neither MCYO nor YAA could have pulled off alone, and we are thrilled to have the opportunity to collaborate to bring about this great performance on March 10th. The musicians are very excited! Never before has a youth orchestra in this area tackled something of this magnitude. We are very proud to have the honor to premier this new interpretation of the two amazing stories. These student musicians will blow you away!

What kind of commitment did the young musicians and singers of YAA  and MCYO make when they accepted a role in Madama Butterfly & Miss Saigon?

This production is the largest that we have taken on, and the same is true for MCYO in their past 50 years. We are pleased that the Board at MCYO and our own Board are all very supportive and see the artistic merit of such a large undertaking, both for our students as well as audiences. This is clearly not just a youth production, but a unique, professional quality production that even veteran opera and theatre audiences will enjoy will have not seen before.

This production has been in the planning for a year, with constant communications between Alan, our director, Cheryl Jukes, the Executive Director of MCYO, Jonathan Carney, the Artistic Director of MCYO, Kris and myself. Besides the excellent music staff at MCYO that has assisted along the way, we have lined up professional costumers, makeup artists, production managers and staff to make this a top notch performance worthy of Strathmore. In addition, we will be taking full advantage of the world class lighting and sound systems at Strathmore to present something like has never been seen at Strathmore.

The MCYO Philharmonic Orchestra has been in rehearsals for Madama Butterfly and Miss Saigon since December and our YAA cast has been rehearsing since early January. We at YAA work really hard to run the organization like a professional company, so our students have known about the rehearsal schedule since back in November, before they even committed to the show. They meet twice a week for music rehearsals and then daily for the two weeks before the performance. MCYO students meet weekly on Wednesday evenings and have also taken on two extra Saturday rehearsals due to the complexity of this concert.

We at YAA are amazed at the caliber of talent that continues to come our way. We are convinced that there is a real need for not just high quality performance opportunities for young people, but also for high caliber music education. Our students have quickly learned that when they commit to a production with YAA, they are not just committing to putting on a show, but also to a deep study of the music and drama of the work and the respect and responsibility that comes with presenting a work like this. We remind them at every rehearsal that their hard work is extremely important because it brings beauty to the world and gives us perspective of the joys and horrors of life. Lofty ideals for kids, we know, but crucial.

Miss Saigon and Madama Butterfly will be presented on the main stage of The Music Center at Strathmore at 4 pm on Sunday, March 10, 2013. For tickets, purchase them by phone (301) 581-5100, or purchase them online.