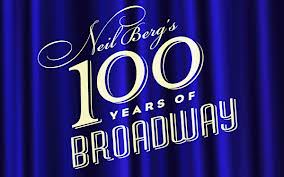 WIN A PAIR OF FREE TICKETS TO
NEIL BERG’S 101 Years of Broadway at
THE MUSIC CENTER AT STRATHMORE
On SUNDAY, MARCH 24TH AT 7 PM

Copy this email address into a new email and send it to: dcmetrotheaterarts@gmail.com

BY TOMORROW FEBRUARY 20TH AT NOON

And tell us why you want to see the show.

The winner will be announced at 2 PM tomorrow.

All new show! Direct from New York, 101 Years of Broadway recreates the finest moments from the greatest musicals of the century featuring five of the actual stars from hit shows such as Jersey Boys, Wicked, and Mamma Mia and Broadway classics from such composers as Jerome Kern, Rodgers and Hammerstein, Kander and Ebb, Cole Porter, Stephen Sondheim, Andrew Lloyd Webber, and more.