The Real Thing in Silver Spring Stage’s production of the Tom Stoppard’s play of that name refers to love. It is the love of two long-married couples when one partner of each is straying with each other. The company does a good job with a difficult play that struggles to find a tone between drama, comedy, and melodrama.

Silver Spring Stage is no stranger to hard plays – part of their mission is to tackle important contemporary works and do the plays that other community theaters do not want to attempt.

British playwright Sir Tom Stoppard is better known on this side of the pond for his Academy Award winning Shakespeare in Love, but in Britain, he is one of the key playwrights for the National Theatre. The Real Thing first premiered in the 1980s in London and Director Joseph Coracle keeps this production set there in that time period.

The play focuses on Henry (Scott Courlander) and Annie (Emma Klemt). The two actors in these roles in the original production and a revival all won Tonys for taking them on and it is this complicated central relationship that drives the play. It begins when they cheat on their spouses and continues as they marry and attempt to negotiate this second marriage. Some have said this is Stoppard’s most autobiographical play, since the plot about an intellectual playwright who finds success in a second marriage closely parallels his own life.

The plot depends on the charisma and light of the character Annie which draws Henry away from his wife, and Emma Klemt successfully embodies that. Her chemistry with Courlander also works wells since a great deal of the first act requires most of their communication to be covert as they flirt in front of their spouses. The whole cast also handles Stoppard’s dialogue well, which is known for it’s crazy precision and the left hand turns each line takes when you’re expecting right. They veer from the topic of pineapple dip to Rembrandt placemats, to Marxist politics to the nature of love and back again in a few minutes, though the English accents sometimes sounded a bit more like Downtown Abbey than modern London, the cast pulled them off.

Patrick Miller and Julia Morrissey in the difficult roles of the cast-off spouses Max and Charlotte hold their own with the leads and both bring a dignity to these characters. Conor Scanlan, Katie Zitz, and Brian McDermott fill out the cast as another partner for Annie, Henry’s daughter, and a political prisoner that Annie takes an interest in. The whole cast has a great sense of comic timing for the dry, British humor Stoppard excels in.

The set by Director Joseph Coracle is an ingenious series of wallpapered screens that begin the play draped in black to be revealed and rearranged throughout into a series of rooms of the character’s houses. The center of the stage and what Coracle chooses to focus the play around is a hi-fi record player. Much of the dialogue focuses on musical tastes – what is highbrow and not and what music we choose to mark our lives with. Each scene includes a soundtrack of opera, Bach, The Supremes or other 70’s bands. Each character is constantly changing the record to tip the mood towards nostalgia or numbness or celebration.

One major part of this play is the play-within-a-play element as both of Henry’s wives are actors and two plays are acted out onstage. Both are about infidelity and falling in love as well. Lighting Designer James Robertson does a good job lighting the different rooms and especially these different plays. The director also designed the sound and picked some classics for the soundtrack.

Costume Designer Crystal Simone Fergusson digs up some excellent 80’s clothes from the high-waisted pants to the tight sweaters and thick belts. The whole production team did a really good job bringing the 80’s to life. It was very strange to realize this is now a “period” piece.

What is the real thing? Watching this play, I’m still not sure. As the character Max says in the play, “Love and loving are unliterary.” For a literary playwright, it seemed Stoppard could not get a handle on it. The characters discuss almost everything under the sun and sleep with every other character in the play, but does that make it the real thing? I don’t know.

I do know though, that Silver Spring Stage has tackled this ambitious work with excellent comic timing, real character, and a killer soundtrack. 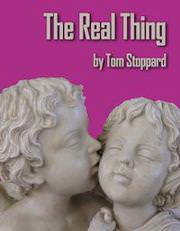