Split This Rock is a non-profit organization that teaches and performs spoken word poetry or slam poetry. A huge part of the organization is focused on young people and one of their major offerings each year is Louder Than a Bomb, which brings together high school students from DC, Maryland, and Virginia. They focus on issues of social justice and speaking truth through poetry. They are an international organization that is based here in DC. 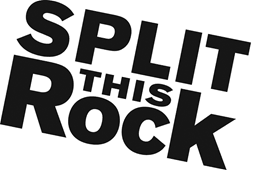 At INTERSECTIONS, they brought six poets to perform for a passionate audience, which was as much a part of the performance as the words themselves. You learned very quickly to snap your fingers for the lines that move you or voice whatever support you like. Call and responses were a part of every poet’s performance in addition to the title of the show.

Jonathan B. Tucker, the youth programs coordinator for Split This Rock went first with a couple of fierce poems. Black History Month is going on and several poets brought it up, but he also did a more personal, humorous poem. He rallied the crowd and wowed them with his rhymes.

After him, a kid who is known as Vocab took the stage. Split This Rock runs a DC Poetry Slam Team who performs around the District and beyond.  Vocab will be auditioning next week with for the team. You can attend the finals to see him and 11 other kids compete at GALA Hispanic Theatre on Saturday, March 2nd. The fact that he’s not even in the group yet is pretty incredible because he has an amazing ability to talk about the smallest moments of life and have them mean everything. He’s also a great performer.

After that, two more teachers came on. Sarah Browning is the Director of Split This Rock and read several short poems about injustice and daily life and speaking out against it.  The joy she took in students on stage was infectious.

Another mentor for the project also read. He had an amazing poem about Emmett Till, a black man murdered in the South, who has come back into the spotlight after Lil’ Wayne included controversial lyrics about him in one of his songs. He also performed another more personal poem about his son. That seems to be the kind of poetry they focus on – either the deeply personal or the grand historical moments, and how they intersect.

Two other poets performed. They were both graduates of the DC Youth Slam Team and were obviously seasoned performers. One debuted a new work and another performed works he had composed while mentoring other kids currently in high school. These exceptional performers were

What was amazing to see beyond the outpouring of joy from the audience was how completely unapologetic each poet was about their poems and their style, from Tucker’s outgoing, quick rhymes to a student’s slower, quieter style. Both were equally powerful. The atmosphere they created with every word and every snapping finger was unlike any show I’ve been to – everyone in the audience was family and every moment was pure creativity.

Note: I apologize to Kenneth Carroll – another mentor for the project – who also read – and to Brandon Douglas, Thomas Hill/Vocab, and Scott Williams for not knowing their names when I wrote this review originally. There was no program and I was given their names after the review was published. I want to thank them and honor them for their inspiring and heartfelt performances.