Into the Woods Showcases Shenandoah Talent

Stephen Sondheim’s musical Into the Woods, must pose a tempting challenge for directors. The musical interweaves the plot lines of four familiar fairy tales, distorting them in the first act and subverting them in the second in a way that flips the bird at conventional expectations, many of which deserve to have the bird flipped at them now and then. Since its premiere in 1986, the play has enjoyed five major revivals, including two in London, one on Broadway, and an open air production staged in the woods of Central Park in the summer of 2012. And last weekend, The Shenandoah Conservatory brought Sondheim’s forest fable to Winchester, to the delight of many, for it is much beloved by many people who love theater.

If the platinum-grade production values one associates with the Conservatory qualify as conventional expectations, then this show conforms as well as any other: it’s a spectacular display of sight and sound. If it doesn’t send you out of the theater humming a tune — well, that’s not the fault of anyone at Shenandoah.

“The beauty of this musical is that it resonates on so many different levels,” Jonathan Flom writes in his director’s notes to the show. “It’s depth is bottomless, and one could easily write a book analyzing all of the themes and the symbolism hidden well within the cleverness of the lyrics, the melodies, and the orchestrations.”

Set Designer Frank Blackmore reinforces that literary vision of the play by using enormous open books as the walls of the three small houses where the main characters live, the houses they leave to go into the woods, where an even bigger book lies open among the trees, it’s pages rolling like the sides of a ravine. Spectacular sets created by the Conservatory’s Scenic Design faculty are a hallmark of productions in the Ohrstrom-Bryant Theatre, and this production continues that tradition.

The orchestra is also excellent: sixteen players plus conductor Thomas Albert working in a pit below the stage — a pit that’s usually in front of the stage, but Blackmore has added an arc to the performance platform, encompassing the pit but not enclosing it, so that actors have to dance around a smile-shaped hole in the floor, even in the dark. Perhaps it’s meant to symbolize the pits that all of us are liable to stumble into, whether we wander through the woods or not. Perhaps it’s a reminder that music emerges from our depths and hidden places.

All of the singers have the sort of beautiful voices that reflect years of cultivation: they can move from note to note as quickly as fingers move from key to key, and they hit each note on the head — bold pure voices with bravura vibratos, every one, some twenty singing roles. I remember Cinderella’s prince (Zac Ostrowski) and Rapunzel’s prince (Tyler Humphrey) singing a duet about the pains of love called “Agony,” and I remember the arresting voice of Maranda Rossi, who plays a golden harp.

If I don’t remember other performances, it’s not because the singers don’t deserve to be remembered: it’s because I didn’t like the music Sondheim wrote for them to sing.

Sondheim is widely admired, and I’ve heard people call this musical his masterpiece, so I was reluctant to admit that I didn’t like the music. My wife and I kept nodding and smiling, hoping those gestures might give us a better shot at liking the music, because we wanted to like it, especially me, since admitting that I didn’t like it would peg me as a Philistine who writes about Gershwin in public and hurries home to crank up Garth Brooks. The next day we asked a couple of aficionados, guys who might paper the half-bath off the kitchen with old musical scores, what they think of Sondheim’s masterpiece — neither of them saw the Shenandoah production. 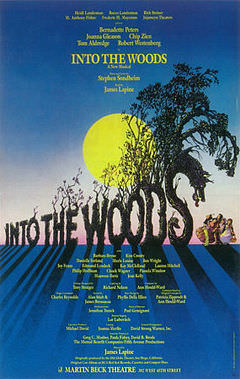 “The lyrics are supposed to be clever,” one of them said, and they certainly are that. Consider this exchange between Jack (the beanstalk climber) and his mother, who wants him to sell their cow (Milky-White):

Jack: But Milky-White is my best friend in the whole world!

Jack’s Mother: Look at her! There are bugs on her dugs. There are flies in her eyes. There’s a lump on her rump big enough to be a hump–

Jack’s Mother: Son, We’ve no time to sit and dither, While her withers wither with her– And no one keeps a cow for a friend! Sometimes I fear you’re touched.

“But,” my friend continued, “the music doesn’t go anywhere. The first act seems to re-use the same discordant phrases again and again. I need more melody.”

“I want to like it,” said the other friend, “and I’ve seen it several times, but the only reason I ever stay for the second act is because it’s Sondheim, so you feel like leaving is against the rules.”

My wife and I didn’t break the rules, but we left yearning for the simple tunes in shows like Grease and Nine to Five, and wishing we had more sophisticated musical taste.

Shenandoah Conservatory’s Into the Woods played from February 28-March 3, 2013 at the Ohrstrom-Bryant Theatre – 620 Millwoood Avenue, in Winchester, Virginia.