If audiences selected the Cappies Award winners, Glenelg Country School might as well start making room for another trophy in May. To borrow one of the lyrics from the current Glenelg program, its 2013 competition entry, A Day in Hollywood/ A Night in the Ukraine, is “just too marvelous for words.” 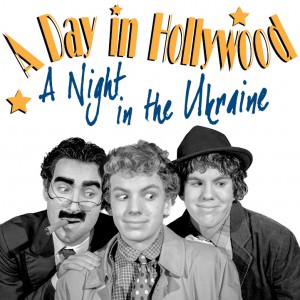 Dotted with winning performances, nostalgic tunes, a precision marching chorus line, and a spot-on burlesque impersonation of Groucho Marx, this ode to early Hollywood movies is like no other high school show you’re ever likely to see. Even when something it tries doesn’t quite come off, you love it for trying.

The 1981 musical is half tongue-in-cheek revue and half evening of skit-style comedy starring the Marx Brothers. It was originally staged in New York by Tommy Tune, and as one would expect from the Tune-meister, tap dancing is a big part of the bill.

Another challenge is posed by the script’s flow of Hollywood trivia, and any adults in the crowd who grew up watching “the late late show” will chortle at hearing these pink-cheeked youngsters singing about Don Ameche courting Alice Faye and how Bette Davis always seemed to be walking out on George Brent.

All of Act One is a collection of novelty tunes saluting movies of the 1930s, complete with detours for Hollywood lore and a looney tunes compendium of lines called “I Love a Film Cliche.” It is set in a replica of the Grauman’s Chinese Theatre forecourt, handsomely envisioned by Ben Shovlin and his student co-designers Ben Murphy and Elliott Warrington.

A virtual army of uniformed ushers in braided tunics and pillbox hats flood the stage to guide you to a seat in their Hollywood time machine. Marissa Diehl makes for a fetching Jeanette MacDonald singing the faint praises of Nelson Eddy (photos might have been helpful to those in the audience who didn’t quite get the reference).

Sarah Narcise showed star potential in a brief homage to Shirley Temple, and Jada Damond hit all the tricky bent notes and strummed a few heartstrings with Jerry Herman’s ballad of a starlet’s failed ambitions in “The Best in the World.”

Best of all, though, was an extended medley of songs written for the movies by Richard A. Whiting. Here Tyler Hooper sweetly croons “Sleepy Time Gal” to Nicole Rieu; Brandon Ocheltree laments his “Double Trouble”; and the graceful trio of Jada Damond, Tessa More and Megan Steeley do sweet justice to the clever lyrics of “Japanese Sandman.”

Act Two takes us further into filmland with a zany deconstruction of Chekhov courtesy of the Marx Brothers. Cooper Taylor gets a full share of laughs with his faux Italian cheer as the Chico character. And Conor Burke makes for nothing less than inspired casting as the delicately whack-a-do Harpo. But it’s Tyler Hooper as a sly, offhanded and totally subversive Groucho figure who steals the play with his naughty asides and irreverent jibes.

We are so ingrained with political-correctness these days that when the matronly Margaret Dumont-character, Mrs. Pavlenko (played by Saraniya Tharmarajah in a fat suit), appeared and Groucho cracked, “Oh, look, someone draped a skirt around the battleship Potemkin” and the audience audibly gasped.

In the best Margaret Dumont fashion, though, Saraniya projected more consternation than hurt feelings at Groucho’s wisecracks. How could anyone get angry at a devil with such angelic comedy timing?

This show could probaby not proceed past the second week of rehearsals at many of today’s public schools. Happily, Glenelg Country School is more attuned to the artistic imagination than to the prevailing political winds.

With live accompiment provided by the school’s music students and overseen by Brant Challacombe, A Day in Hollywood/A Night in the Ukraine is positioned to put Howard County once again in the Cappies winners’ circle.

A Day in Hollywood/ A Night in the Ukraine will play its final performances TODAY at 2 p.m and 7 p.m. at the Mulitz Theater at Glenelg Country School – 12793 Folly Quarter Road, in Ellicott City. Tickets are $10, and are available online.

LINK:
John Harding previews A Day in Hollywood/A Night in The Ukraine.