Cardinal Points by Rebollar Dance is an undertaking that not every choreographer would be willing to experience. Choreographers, for the most point, come into the rehearsal studio with a vision, and put it on their dancers. There can be a dialogue between the parties, suggestions made, experiments with different moments, but at the end of the day, the choreographer’s vision is first and foremost. With Cardinal Points, Erica Rebollar has presented work alongside that of her dancers. Not only is the success of this show a testament to her choreographic prowess, as well as that of her dancers, but it is proof that she knows how to select a mature, open, and creative team of dancers that can present work alongside her own and have the evening be cohesive, evocative, and exciting

Three pieces in the evening stood out to me as particularly engaging and exciting.The first of which was Excommunication, choreographed and performed by Nate Bond and Kjerstin Lynse. This piece was easy to digest visually, because the four corners of the stage had their own mood, and specific movement happened in each. In the upstage right corner lived sustained, efficient movement, in white sidelight. In the upstage left corner of lived disco-inspired, light-hearted movement, in a criss-crossing pattern of light projected onto the marley floor. In the downstage right corner lived weighted floor work, in red lighting. And last, but certainly not least, in the downstage left corner lived fast-paced, athletic movement, both standing and on the floor, with clear pathways through space.

The intrigue for me happened in the moments between the various corners, as Bond and Lynse either made the choice to move from one space to another, or moved themselves to another space due to where the movement of that corner of the space lead them and how they felt about it. The striking moment of the piece for me was when both dancers fully embraced the upstage left corner of the space, aka the home of disco and jazz-inspired movement. The peace that can come from embracing what works naturally, as opposed to trying to embrace something that just doesn’t fit is something that really resonated with me after the concert.

Inside Out, choreographed by Erica Rebollar and Heather Doyle and performed by Heather Doyle, Yoko Feinman, Kjerstin Lynse, and Elizabeth Terschuur, was another piece that struck my fancy. The piece began with a video projection in black and white, of a cobblestone path as someone moved through space. As the video progressed, various human faces in black and white filled the screen, in a celebration of light and shadow. The movement of the piece totally juxtaposed the light and shadow of the faces, because the dancers, in black sacks from their waists to their fingertips, performed choreography celebrating their bare legs, while the video celebrated their faces, expressions, etc. The movement of this piece resembled the steady flow of yoga, with elements of sustained acrobatics here and there. There was an internal focus to the piece, almost ritualistic, as if each dancer was performing for her benefit. The unison of the piece felt unimportant, as if connection to others was secondary to each dancer’s objective. The piece left me feeling contemplative, because on the one hand, our legs physically take us on our journey through life but our faces can tell so much about where we’ve been, what we’ve seen, and where we hope to go.

The last piece in the evening, Space Junk (excerpt), was the pièce de résistance of Cardinal Points. This portion of a larger work was the perfect note on which to end the evening. Choreographed by Erica Rebollar and dancers, and performed by Nate Bond, Heather Doyle, Yoko Feinman, and Kjerstin Lynse, this piece leaves the audience remembering how incredibly in sync this company is, and how much Rebollar celebrates what they each bring to the table as dancers in her company. The full-bodied spiraling down to the floor and back up again and exhilarating leaps were paired well with more nuanced, quirky ticks and flutters of the hands and other limbs. The dancers owned the stage space, and this was one of the more externally focused, athletic works of the evening. Unexpected moments of stillness stood out in this work as strikingly beautiful, as well as the image of a dancer luxuriating in movement facing away from the audience as the other dancers, faced to the audience, retreated to the space upstage. The sound score for this work works created an environment in which bridging the gap between full-bodied movement and isolated gestures is commonplace to the performer and still new to the audience.

The technical aspects of this show allow the choreography and performance to shine, which sounds like it should be obvious but this is not always the case. The cohesive costuming allowed for an organic work from one work to the next, with the dancers in layered, muted separates, in shades of grey, purple, olive, and blue. Jason Aufdem-Brinke’s lighting impeccably highlighted isolated moments, and created distinct and intriguing environments for other moments. The technical video prowess of David Dowling elevated each work and helped further my investment in the themes and motifs of each piece.

Rebollar Dance is an exciting and entertaining gem in the DC dance scene. Erica Rebollar and her dancers bring honest work to the table time after time, and there is something refreshing in a company of dancers/choreographers that don’t need bells and whistles to make their work sparkle and shine. The movement speaks for itself; it evokes intimacy, humor, and excitement at various moments throughout, and leaves you wanting more. Put Rebollar Dance on your radar so you don’t miss any future performances of their work! 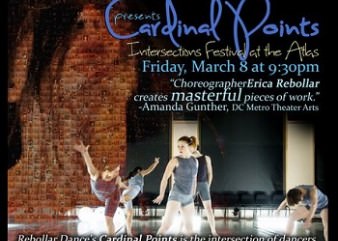 Check out Rebollar Dance in the Dance Metro DC Commissioning Project at 4:00 pm TODAY – Saturday, March 9, 2013 at Atlas Performing Arts Center. You can also check out the premiere of the evening length Good Hurt at American Dance Institute, June 7-9, 2013. For more information about Rebollar Dance, visit their website.