I have never lived in the eighteenth century, but, in my mind’s eye, I see a quiet era of classical music and gentle manners. In many ways, The George Washington University’s production of Jane Austen’s Emma fulfilled my expectations of England, 1815. There is some music, yes, but there also is a soothing quality to the production. You become consumed by a world of social climbing and match making, as though slipping between the pages of Austen’s novel, as though you are a thread in their social web. 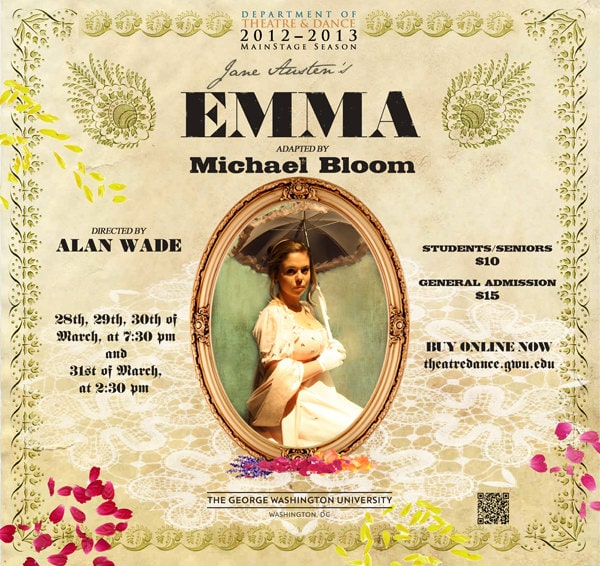 Austen’s Emma was published in 1815, her fourth novel. In crafting the character Emma, Austen wrote, “I am going to take a heroine whom no one but myself will much like.” George Washington University performs Michael Bloom’s adaptation of Austen’s work in a tightly constructed drama,one in which, I might add, Emma Woodhouse (Caitlin Simpson) is utterly likable, despite Austen’s conjecture. The center of her circle of friends, Emma convinces herself that she is a master matchmaker. A string of mismatches unravels, as Emma intertwines herself with the personal affairs of her companions.

Director Alan Wade chooses to downplay the feminist undertones of Austen’s work, focusing instead on the importance of community. The characters are so involved in each others lives that you begin to wonder how they have time for anything besides gossip and meddling. Indeed, remembering who loves whom, who is whose stepfather, governess, aunt, can make you dizzy. Equally dense is the play’s dialogue. The characters rattle off impressive, rapid-fire banter, but the beauty, and much of the humor, of the show lies in its silences. Emma is comfortable in its own skin, unafraid of the power of an uncomfortable beat. Bowler hats and bonnets, coattails and floor-length dresses, Basmah M. Alomar’s costumes capture the essence of the time period, as does Michael McManus’ sound design. His calming score flows between scenes and seasons. Designed by Jonathan Rushbrook, the set is elegant and sparse, a wooden archway and a few velvet chairs. I was perplexed, however, by the flooring. Towards the back of the stage, it juts upward, as if grasping for the ceiling.

The small cast performs a balancing of act of sorts. With the possible exception of Hadley Fielding’s Mrs. Elton, an insufferable socialite, the actors are ridiculous without being caricatures. They are sincere without being sappy. Though Simpson takes the central role, the show is truly a group success.

Simpson blends ego and altruism in her varied performance. On the one hand, Simpson’s Emma pushes her friends towards happiness, or at least, to what she believes will make them happy. On the other, she greedily craves validation. Simpson addresses the audience, exposing her insecurities and judgements, her schemings, and her fears. These outpourings of vulnerability are what make her likable, as she holds herself accountable for her mistakes. Yet, these sidebars also shatter the fourth wall, the illusion that Emma’s world exists outside our own.

Charming Sean Quitzau plays up the paternalistic nature of George Knightley, the only one of Emma’s friends who challenges her at every turn. He lectures Emma as a father would, balancing wry wit, stubbornness, and genuine affection. Arielle Katcher plays Jane Fairfax, a passionately disinterested young woman. Katcher, by her character’s nature, is often silent, but she is always present. You are compelled to understand this statue, this enigma. Sam Game’s Frank Churchill foils Katcher’s Jane, social where she is reticent. Although, in his own way, he is just as mysterious. As  Emma’s friend Harriet Smith, Katharine Stoker depicts a needy character without becoming cloying. The push and pull between the two women presents an interesting dynamic, with Emma manipulating the weak-willed Harriet. Harriet’s love-interest (well, one of many love-interests) Robert Martin is played by Chris Evans, who brings warmth to his quiet role. He has a simple goodness to him, a seventeenth century Forrest Gump. Max Schwager (Mr. Woodhouse) catalyzes the show’s funniest moments. Though playing a one-dimensional character, Schwager develops the nervous mannerisms of an overprotective father. His extreme fussiness and well-timed delivery stick with you.

George Washington University’s Emma absorbs you. In the end, you must leave England and Emma, lovesick troubles and newfound hope. You must leave, but you won’t want to.