Six Degrees of Separation explores the existential premise that everyone in the world is connected to everyone else by a chain of no more than six acquaintances, that there are literally only six degrees of separation between all people. The plot was inspired by the real-life story of David Hampton, a con man who convinced numerous people in the 1980s that he was the son of actor Sidney Poitier. 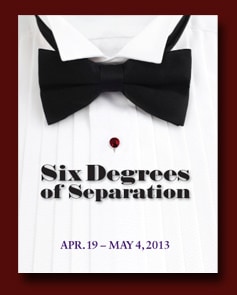 Ayala-Bush said she was drawn to Six Degrees of Separation because it presents “a wonderful opportunity to explore the many aspects of all kinds of human relationships – between husband and wife, parents and children, siblings, friends and lovers, and casual acquaintances.”

“The play also offers revealing insights into how our actions have direct and indirect consequences on others, and into the complexities and inconsistencies of human nature – the conflict between material and spiritual values and between our desire to be truthful and our willingness to be deceitful to achieve our ambitions,” she added.

Since its founding in 1977, Port City Playhouse has regularly received awards from area theatre organizations for the artistic and technical excellence of its productions, earning the British Players prestigious 2005-06 Ruby Griffith Award for All Round Production Excellence for its production of Hauptmann. That record of excellence continues in the company’s 35th season.