Born in the shadow of our parents, it is every child’s journey to discover the source of light shone on them that ignites the inspiration for prosperity in order to, ultimately, cast one’s own projections in this life. Life is complicated, yet it’s simple. Confusing while transparent. It’s unfair. It’s tragic, but offers magical moments and laughter, as well. Life is unpredictable and full of surprises – both good and bad. It is all over the place – seemingly random and disorganized. And who among us hasn’t tried to connect the dots to make sense of it all? This is Andy and the Shadows.

Andy and the Shadows is Ari Roth’s quasi-autobiographical cerebral drama about one man’s quest to find and understand the meaning and purpose in his own privileged life in light of that of his parents, who are Holocaust survivors and who should, theoretically, be more deserving of their happiness than he. Like a cosmic cry for understanding, Andy and the Shadows was written to unfold in the way a mind does in its search for meaning in a senseless world: with effervescent pockets of thoughts; thoughts that create the dots that outline ‘The Big Picture.’ Articulating the genesis of your demons is a painstaking process and I left feeling the image I assembled was more of an impression of ‘The Big Picture’ than the outline. Still – a formidable and moving imprint of the far-reaching reverberations of the Holocaust and the consequent displacement of the Jews – externally as well as internally – on the second generation of survivors.

Searching for the answers, Andy (Alexander Strain in an energetic performance) confronts the angelic visions he’s developed of his Mother (Jennifer Mendenhall) when she was a child devising her survival in the concentration camp, and her legacy in his mind. The stewing questions come to a rolling boil as Andy struggles with accepting his own impending marriage and happiness to fiancée Sarah (Veronica del Cerro), whose presence on the stage is a sweet ingredient in the stew. Andy is trying to come to terms with what it means to be Jewish and American. He wrestles with the internal clashes of being discriminated against and categorized as he travels through revealing experiences in his youth with friends James (Michael Claybourne) and Jerry (Davus Hasty) while at the same time experiencing such good fortune in comparison to the bulk of his Nation. He is conflicted as a People yet living as a Jewish family with safety, security, advantage, and opportunity, and needs to know why and at what cost he received such a sweet bowl of cosmic broth.

Searching for the answers, Andy confronts the angelic visions he’s developed of his Mother (Jennifer Mendenhall) when she was a child devising her survival in the concentration camp, and her legacy in his mind. He also questions his feeling of disgust for a Father (Stephen Patrick Martin) who has a muted history and presence in the household. For their own part, his sisters, Amy (Colleen Delany) and Tammy (Kimberly Gilbert) find their solace in providing help and hope in foreign corners of the world as means of managing. But Andy must interrogate.

And in a biting and bitter scene, Jennifer Mendenhall gives a powerful performance when she puts the lid on the pot and reveals there are no heroes or saints, only people taking hold of moments of inspiration – sometimes at devastating costs. The cast’s hard work and vigor showcases an enthusiastic passion on the stage that divulges a healthy artistic appetite.

Director Daniella Topol creates the distorted world we all inhabit in our minds by having the actors caricature their characters rather than occupy them – much like everyone and everything is exaggerated in our own minds. It is a compelling, if not controversial, artistic choice. While Eric Shimelonis does an absolutely delicious – (may I have seconds?) – job with the sound design, he adds a bit of the depth needed to emphasize the rich stock with which this story is based.

Watching this performance was a wonderful foreshadowing of how – with a little more fine-tuning – Ari Roth’s Andy and the Shadows is bound to become a work of outstanding artistry.

Running Time: Two and a half hours, including a 15-minute intermission. 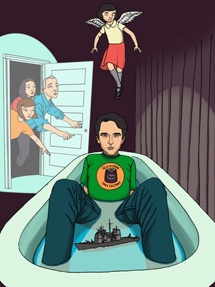