Once again the Maryland Ensemble Theatre’s Fun Company produces another entertaining yet thought-provoking World Premiere aimed for young theatre lovers with My Monster and Me. Playwright Devin Gaither deals with important subjects like bullying, fear and insecurities, self-doubt, friendship, and parental separation, especially among military families (she can relate being an ‘Army Brat’).

The cast is perfection! Kevin Cole is convincing and adorable as 12 year-old Benji the 12-year who is terrified by Dex – the monster that lives under his bed (played by the fabulous and silly and athletic Jack Evans). Lori Cole (Kevin’s real-life Mom) plays both Benji’s Mom and Benji’s new friend Alice’s Mom. Although both of these Moms are so different, Lori Cole gives two great and different performances. Allison Lepelletier Duvall is hysterical as the very eccentric Alice and Kevin and Allison have great chemistry on the stage. They are an endearing ‘Odd Couple.’ Brian Irons is really mean as the bully and was a very convincing Boogieman.

Director Ashley Hall also designed the costumes with Lorene Pregenzer. They did such a fine job that the Boogieman costume really scared my daughter and other children in the audience. My six year-old daughter told me afterwards that he startled her a little. We both loved Jack Evans’ costume, especially the three finger hands.

I was very impressed by Ken Poisson’s Sound Design and Matt Traks original instrumental music which was very catchy. Joann Lee designed a simple and very functional set from boxes, doors, and cabinets. A sturdy bed was added which could support Benji and his monster and had room for the monster to hide under. The set rotated between Alice’s house, the school, and Benji’s home effortlessly. Sarah Shulman and Carey Rausch’s lighting design was clever especially when a light that was drawn functioned as a real light.

So bring your kids down to MET to see My Monster and Me. They’ll have a great time with Benji and Alice, and they’ll love Dex and The Boogieman (although that might take a little while!) 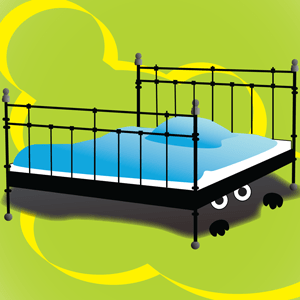 My Monster and Me plays on Saturdays and Sundays through May 5, 2013 at The Fun Company at Maryland Ensemble Theatre – 31 West Patrick Street, in Frederick, MD. For tickets, call the box office (301) 694-4744, or order them online.