The Russian National Ballet Theatre dropped by the Hylton Performing Arts Center in Manassas on Friday to perform a ballet double-header of classics. First they performed Chopiniana  (also known as Les Sylphides) set to the music of Frederic Chopin, using the original orchestrations by Alexander Glazunov and remaining true to Mikhail Folkine’s choreography. After a brief intermission they followed with Marius Petipa’s version of William Shakespeare’s Romeo and Juliet performed to the music of Pyotr Tchaikovsky. Elena Radchenko tweaked the choreographing a bit. The two performances offered many contrast,s and the evening could be billed as a night of beauty and frantic movement.

The plots of the ballets could not get much different. Chopiniana lacks a traditional plot. Instead it ventures to the surrealism of dreams and abstract visions. It is based on the romantic vision of a young poet, played by award-winning Aidos Zaken. Surrounded by the beautiful nymphs dressed in their white costumes it is quite believable the poet’s mind is wandering into romantic thoughts. The dreams and reality float in and out as do the ballerinas who dance around the poet.

The dancers were completely in sync with each other during this performance. Aidos Zakan impressed be it dancing and leaping during a solo, or leaping, twirling and dancing with one of the Nymphs. The Nymphs portrayed by Elena Khorosheva, Maria Klueva, Ekaterina Egorova, Olga Gudkova, and Maria Sokolnikova  shined during their solos and together they danced gracefully in rhythm to on another.

Maria Klueva and Nurlan Kinerbaevhe provided several highlights. They performed some incredible toe-tipping movements which displayed both their beauty and talent.

When they were not dancing they were able to sustain poses for long periods of time. Their stillness demonstrated their amazing discipline. The set which added to the dreamscape feel of the ballet was an outdoor setting with the feel of a forest accented with columns in the background. The stage left was empty and provided plenty of room for the dancers to display their craft.

Imagine Shakespeare’s Romeo and Juliet being performed in a mere 40 minutes. And in those 40 fast-moving minutes the change in the casting and Nurlan Kinerbaevhe performed the lead role of Romeo. There was a fantastic sword fight that added more energy to a performance that was already simmering in excitement. Dmitri Romanov showed his dramatic skills as well as his dancing skills as Father Capulet. His gestures and facial expressions added volumes of dramatic flair to his character, and I found him a joy to watch.

Maria Klyueva was splendid as Juliet, the love-stricken daughter. The whole cast deserves kudos for delivering the famous story through their remarkable dancing and storytelling.

Elena and Sergei Radchenko are credited with sets and costumes. Their sets importantly showcased the action, and changed from the festive celebration at the Capulet’s house to Juliet’s bedroom, which looked appeared to have Christ in a stained glass window. A small bed was used in the bedroom as well.It was simple, yet effective, leaving plenty of room for the action packed ballet.

Party attire, masks, costumes fit for a King or Queen, Friars outfits, and sword fighting outfits were the costumes the Radchenko couple created for the production of Romeo and Juliet. The costumes added color, distinction, and were visually appealing, and just as important – they did not lose their ballet functionality. The costumes and sets varied greatly from the two performances and the contrasts created an awe inspiring moment when the curtain rose for Romeo and Juliet.

Performing both of these ballets together made for an entertaining evening. The contrasts helped to keep the audience’s attention and interest. And most important – it showed the great versatility that the Russian National Ballet’s superb and talented dancers and designers have.

Running time: approximately one hour and thirty minutes with one intermission 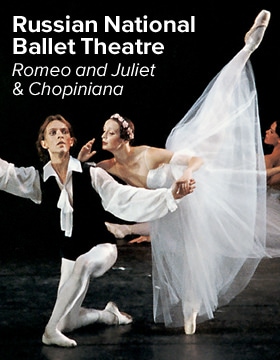 The Russian National Ballet Theatre presented Chopiniana and Romeo and Juliet one night only on Friday, April 12, 2013 at Hylton Performing Arts Center – 10960 George Mason Circle, in Manassas, Virginia. Check their upcoming performances on their event calendar.