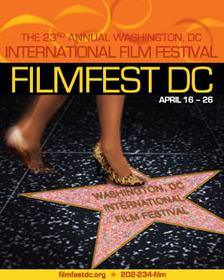 Filmfest DC 2013‘s spirit of cinematic celebration is five star entertainment, and has become an important Washington showcase for new international cinema and talent. Featuring over 80 features, documentaries, and shorts, this year the 27th edition of Filmfest DC has added a bold, and exotic provocation to the festival’s programming that looks to be thrilling and edge-of-your-seat cinematic fun.

Tony Gittens, the founder and Director of the Washington, DC International Film Festival leads the annual adventure that includes the return of popular Filmfest DC sections: The Lighter Side, Justice Matters, the Circle Award, and Global Rhythms again this year, and introduces an exciting new film section – Trust No One (My favorite of the Fest), featuring espionage, crime, and film thrillers of international misdeeds.

The adult and audacious Austrian provocateur Ulrich Seidl’s Paradise Trilogy is just one of the festival highlights. Laurence Anyways, by Canada’s Xavier Dolan, brings a new kind of love story to the screen, and directing her first documentary is fellow Canadian, Sarah Polley, the Oscar-nominated actor/director whose latest genre twisting film Stories We Tell, riveted the Telluride, Venice, Toronto, and Sundance Film Festivals.

Here is a mini-highlight selection of 10 anticipated and MUST-SEE films at Filmfest DC 2013 that you still have the opportunity to treat yourself to before the Festival ends on Sunday April 21, 2013:

Chinese master filmmaker Chen Kaige is know for his his perceptions of Chinese traditional culture in his epic, richly supplied dramas like Farewell My Concubine, The Emperor and the Assassin, and Together. Caught in the Web is something different. Perception is reality, and Kaige’s latest film examines modern China and life in a digital world where everything is connected. Personal insight into the effects of how misunderstanding and the technology that was meant to bring us together, can be damaging and tear us apart. Caught in the Web was the official entry of China to the Best Foreign Language Film category at the 85th Academy Awards this year.

In Mandarian with English subtitles.

The stylish, action thriller Easy Money based on Jens Lapidus’ novel, Snabba Cash (Easy Money), made a star out of Joel Kinneman (AMC’s The Killing and soon to star in Robocop remake) and director Daniel Espinosa, who answered the knock of Hollywood and went on to work with Denzel Washington on Safe House. Coming (again) to a theater near you …Warner Bros. holds the Easy Money rights to an American remake with Zac Efron.

The Swedish underground and the pursuit of money cross paths once again in Easy Money II, the sequel, and a Filmfest DC feature in theTrust No One lineup. Taking place three years later with a new director, but continues with Joel Kinneman at the lead. Part three, Livet deluxe (Life Delux), in the Easy Money trilogy is scheduled for release in Sweden this Fall.

In Swedish and Spanish with English subtitles.

This emotionally complex and masterful tale adapted from Juan Mayragoa’s play The Boy in the Last Row, stories a neurotic French teacher and an intriguing high school student, whose healthy dose of curiosity blurs the lines of separating fact from fiction, and the unexpected and uncontrollable unfolds.

In the Shadow, director David Ondricek’s gorgeous noir investigation, uncovers the elaborate plot by the former Czechoslovakia State Security forces to detain and eliminate Jewish citizens. This is another film in Filmfest DC’s “Trust No One” lineup, and stars Sebastian Koch (The Lives of Others) and Ivan Trojan. Set in Prague in 1953, everyone is hiding something in this absorbing, political intrigue exposing Communist era crime, and was the Czech Republic’s official Oscar submission for Best Foreign Film in 2013 and practically swept the Czech Lion awards including Best Film, Best Director, Best Screenplay, and Best Actor.

Actor – Director, Xavier Dolan’s (I Killed My Mother, Heartbeats) third feature Laurence Anyways is more than a feature length music video, but Dolan’s vibrant up tempo soundtrack is a pleasing contribution to this heartfelt, passionate, and tumultuous original drama. What do you do when your boyfriend tells you he wants to be a woman? What follows is a visceral and cerebral confrontation of prejudices, family and friend reactions, and the tested personal matters of the heart that make this an exciting, fresh, unconventional revelation from an emerging and mature voice.

We are surrounded by and live in a world of conflict, and Austrian writer-director Ulrich Seidl’s controversial Paradise trilogy are the latest unsettling trio of films from the acquired taste filmmaker who embraces taboo subjects, perversions, and turmoil. Seidl’s aggravation style of inspiration seem to reflect the search to tell the reality and truth of such situations – or at least the extremes of “truth” as Seidl perceives it. Such revelations have often provoked scandal and a range of emotions, and the Paradise trilogy of Love, Faith and Hope are no exception – even garnering a terse reaction from the Vatican. Seidl’s fascination in ugliness is balanced with his observational humor, surprising honesty, and challenging emotion – skills of a talented autuer with a unique point of view.

On the beaches of Kenya love is a business. Paradise: Love is the story of a female sex tourist in Africa. The first film in director Seidl’s Paradise trilogy was nominated for the Palme d’Or at the 2012 Cannes Film festival, and won the Viennale Austrian Film Awards for Best Film and Best Director.

Paradise: Faith examines the challenge of sexuality, marriage and religion in our most vulnerable times. The second film in director Seidl’s “Paradise” trilogy was nominated for the Golden Lion at the 2012 Venice Film Festival, it won the Special Jury Prize and ‘CinemAvvenire’ Award for Best film in competition there.

Diet camps, harsh adults, unhappy teens, and the transgressive actions taken when kids no longer abide to the rules and lust and desire take over. Paradise: Hope, the final film in director Seidl’s “Paradise” trilogy, was nominated for the 2012 Berlin Film Festival’s Golden Berlin Bear.

In German with English subtitles.

Claude Miller (A Secret, Alias Betty, L’effrontée), a personal director favorite, who recently died of cancer in 2012 , directs Audrey Taou in Thérèse Desqueyroux, his final film, as the lead character in this classic French novel adaption of the François Mauriac novel of the same name. Thérèse Desqueyroux is about a 1920’s aristocratic woman with modern ideas who is set up “for the good of the family” in an arranged marriage and soon finds herself unhappily wed, and struggles to break free.

Starring Martina Gedeck (Baader Meinhoff Complex, Lives of Others, Mostly Martha) and directed by Julian Roman Posler, winner of the Prize of Ecumenical Jury at the 2012 Berlin Film festival, (given to directors who have displayed genuine artistic talent and succeeded in portraying human experiences that sensitizes viewers to spiritual, human or social values), The Wall is a visually lush but sparse drama about a woman who finds herself trapped by an invisible force in an isolated area of the Austrian mountains. Based on the bestselling novel by Marlen Haushofer, the film asks questions about our relationship to nature, animals and ourselves.

In Germany with English.