Memory and myth are intertwined in the DC-7: Roberto Clemente Story. The mythic aspects of sports, and baseball in particular, usually draw on nostalgia for how things used to be and cliches of the innocent past. But the fulfillment of Roberto Clemente’s legacy is about the future. His legacy is one of leading a productive life of passion, love, and purpose. It is the committed pursuit of excellence, and dared dreams to make a difference.

I know that was what #21, Pittsburgh Pirate, Roberto Clemente represented/represents to me. As a young child and a baseball little leaguer, Roberto Clemente “El Magnificio,” was my role model and “hero”- on the field and off. For an eight-year-old, black girl growing up with soybeans and the cornfields of Indiana, admiring a deceased, baseball player with a “weird” name that most didn’t recognize, was more than a little strange at that time (to say the least).

Oh, how quickly things change. Now, a few decades later, as Clemente’s reputation, and worldwide admiration continue to grow – in addition to visible, artistic references like Luis Caballero’s, DC-7: The Roberto Clemente Story – fortunately my personal story is not quite as unusual. Today, Roberto Clemente is a more, widely recognized and respected name.

Currently playing at Gala Hispanic Theater in Washington, DC, DC-7: The Roberto Clemente Story, is the widely accessible musical about the ascent of a man into the making of a myth. Fond childhood memories aside, you don’t have to be a baseball aficionado or a music theater fan to enjoy this bilingual, bio-musical tale about character, passion, and drive.

The day I attended was with a responsive and attentive student-filled matinee with Middle and High School students from multiple area schools including a Spanish class from the Chelsea School in Silver Spring, MD, a private education school for the learning disabled. There is something for every theatergoer to appreciate with this DC-7 production, and it begins with inspiration. Of course, if you enjoy both musicals and baseball like I do, then DC-7: The Roberto Clemente Story will leave you enlivened and fully satiated.

A symbol of action and passion, Roberto Clemente Walker (the proper Spanish full maternal name) gave his life in the service of others. He died in a plane crash (a DC-7) on December 31, 1972 at the young age of thirty-eight. His body was lost at sea, never to be recovered, attempting to deliver food and medical supplies to Nicaragua after an earthquake in 1972.

Roberto Clemente represents more than baseball. Clemente was not the greatest baseball player that ever lived, yet he is the rare athlete that who rose above sports to become a symbol of themes and ideas greater than the physical baseball talent he possessed. Much of Clemente’s time during the off-season involved in charity and humanitarian work, and during the winter of 1958, he joined the United States Marine Corps Reserve (A fact that is not covered in the play, but in two hours you can’t cover every highlight in a life as rewarding as Clemente’s.) What is clearly defined in DC-7 are Clemente’s respect and admiration for Dr. Martin Luther King, Jr., and his participation in the civil rights movement as he battled against discrimination and the inequities faced as a Spanish-speaking black man from Puerto Rico. His heroism transcended the social and racial issues of his time and, and has since elevated him to remain vivid in America’s pastime consciousness.

Playwright Luis Caballero, who is also the Director of DC-7: The Roberto Clemente Story had made a career in writing children’s musicals, until creating DC-7, a stirring, emotion and culture rich tale available to a wider, and adult audience. The musical takes viewers through a recollection of  personal stories of Clemente’s early life in Carolina, Puerto Rico, to his life as a Major League baseball player, up until his untimely death. The memories shared by many are guided by three narrators: Clemente’s wife, Vera (Keren Lugo), Roberto’s friend Ramiro (Ricardo Puente), and begins with  Roberto’s older brother Matino, played by Josean Ortiz.

The informative storytelling is easy to follow, and the Clemente character is played by the vibrant and sincere, easy-going lead, Modesto Lacen. Caballero’s smart direction and creative inclusion of video projections of the actual news footage of Clemente’s 3,000 hit, interviews, and home video clips of his wedding are special, touching moments highlighting the production.

The dramatic moments in DC-7 are intense and captivating – especially the scene with Clemente and the police encounter that ends the first act. I found myself viscerally responsive and the surrounding audience affected, engaged, with rapt attention.  Modesto Lacen fully embodies his titled character and is quite convincing as Roberto Clemente. What is especially impressive about this organic performance is Lacen’s attention to detail. He gets the little things right, like Clemente’s speech cadence, and his batting stance and swing – just a few examples of what makes his transformation ring true. Another, is his versatility expressing vulnerability.

The decision to tell the Roberto Clemente story as a musical is a brilliant one. One that you might not be convinced until you see it. The narrative sequences could be stronger, more substantive as a whole, but the music by Luis Caballero and Harold Gutierrez is standout. And, the musical direction by Didier Prossaird of the Sin Miedo salsa band paints a picture with the descriptive songs, combined with the lively choreography in DC-7: The Roberto Clemente Story make for an entertaining, and sufficiently paced story of life love, and humanity. It’s a much better musical than it would be as a straight play.

The ten-song, well-balanced performances uniquely present and enlighten the vulnerability and spirit of the characters, helping to establish the historical, romantic, and cultural events in the Clemente story. Whether it’s the crowd pleasing Carribean sounds, the gospel influence, or the zest of the rhythmic musical style of Bomba y Plena, (which is a combination of Spanish and Afro rhythms that represent the vast cultural tradition of Puerto Rico), Caballeros’s music compositions and melodies expertly set the diverse tone and atmosphere of Clemente’s homeland and life experiences. Luis Salgado’s fluid and kinetic choreography is the engaging, perfect compliment to the songs and text. The vivid musical numbers fill Jose Lopez Aleman’s simple scenic design of a baseball diamond set with a moveable dugout  with verve, intensity, and skill. Costume Designer, Harry Nadal is effective representing the personality of the characters and the time period (I love Ramiro’s platform shoes and leisure suit), and the ensemble clothing designs are snappy.

The cast is a complimentary mix of local talent, actors from Puerto Rico, and five members (including Modesto Laren as Clemente) from the original Off-Broadway production in New York in 2011. They are entertaining and cohesive group that play together like they are really having fun and fully in the moment. Caballero has done an infectious job sharing the spirit of Clemente and the passion of the production.

The featured vocal highlights of Keren Lugo, is a natural, scene stealer who plays Vera, Clemente’s wife. She has a lush, soulful tone to her voice that is so good, one wishes there was a recording to listen for repeated play. The chemistry between Modesto Lacen and Lugo is palatable and real. And, one can sense the spark every time they share as scene or a stolen glance with one another.

Although listed as an ensemble player, I would be remiss if I did not mention the unexpected revelation that is Alexandra Linn. She performs with such a joy, and consistently delights with the ensemble dance choreography (her Latin dance skills are superb) and in her duet and solo singing moments (Her hauntingly, beautiful “Amazing Grace” will move you to tears). She also performs memorably in the narrative scenes where she plays a role – especially as Dorothy Carrington, the mother of seven children ( also referenced as ‘DC-7’). I look forward to seeing this “triple threat” again in future local productions.

Ricardo Puente (Ramiro), Josean Ortiz (Matino), Xiomara Rodriguez (Madre), Miguel A. Vasquez Cartagena (Padre), and the four other members of the multi-talented ensemble round out this humorous and likeable cast.

Roberto Clemente broke racial and language barriers, and his determination, dignity, and a masculine elegance, paved the way for the high standard that waves of Latino players would follow, and who now dominate the game. Roberto Clemente had a 18-season career with the Pittsburgh Pirates that ended with 3000 hits, a National League MVP Award in 1966, along with two World Series championships. (The Pirates won the 1960 and 1971 World Series, and Clemente was the World Series MVP in 1971). Clemente was also both a twelve-time Golden Glove winner and National League All-Star, and he led the league in batting average for four batting titles.

Eleven weeks after his death, Clemente was voted into the Baseball Hall of Fame. (He and Lou Gehrig are the only players in major league history to be enshrined without waiting the normal five-year period after their playing days). He was the first Latin American player to be inducted, and Major League Baseball presents the Roberto Clemente Award every year to the player who best follows Clemente’s example of humanitarian work.

“Anytime you have an opportunity to make a difference in this world and you don’t do it you are wasting your time on this earth.” – Roberto Clemente

There is power in a name. In Spanish, Clemente means ‘merciful, gracious.’ In life, Roberto Clemente was a father of three, a loving husband, a storied baseball player, and a philanthropist – a work of art.

In death he is a cultural icon.

DC-7: The Roberto Clemente Story is a winning opportunity to experience a glimpse of the Clemente myth and serves as an inspiration to the others who dare to make a difference.

Surtitles in English and Spanish depending on the language spoken on stage. 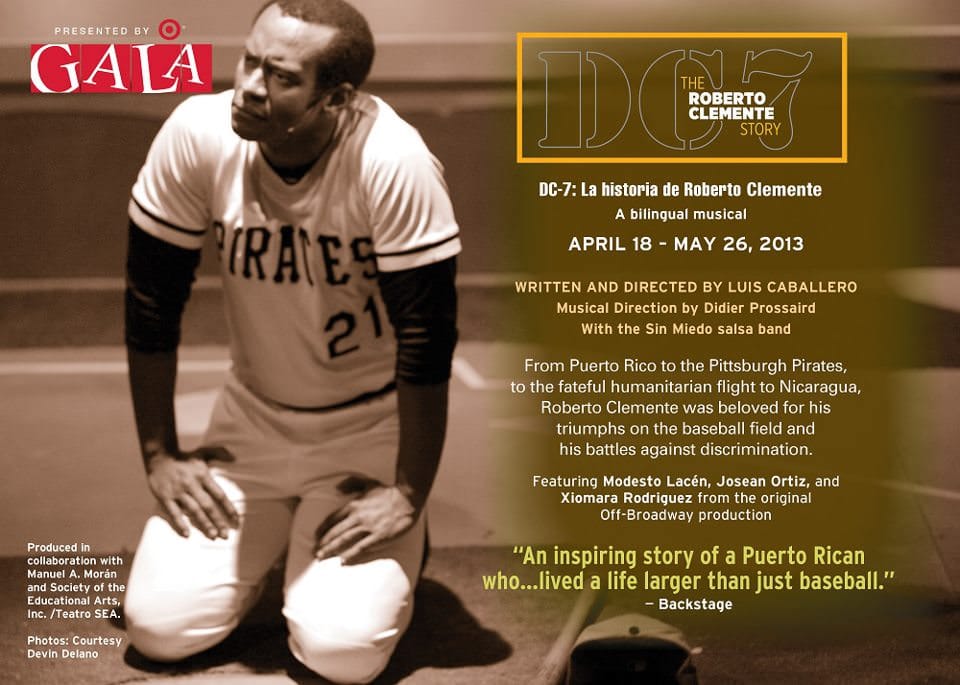