The stars were out in force for the Kennedy Center’s 21st Annual Spring Gala. On the program was My Fair Lady In Concert sung by some of Broadway and the West End’s biggest names like Jonathan Pryce, Michael York, and Cloris Leachman, and made possible by the Boeing Corporation. They raised $2.2 million to keep The Kennedy Center going for another year of magnificent productions.

For all the years of history and the closet full of awards these actors brought to the stage, it was a surprisingly light-hearted, entertaining event. The cast had four days rehearsal to stage this musical that was so much more than a concert. Most songs were fully realized and off-book, complete with ensemble and choreography. Brief, usually humorous scenes were staged between numbers. We got a perfect taste of the whole show with all the best, funniest moments.

The Kennedy Center has a close connection to My Fair Lady because Frederick Loewe, who wrote the music, and Alan Jay Lerner, who wrote the book and lyrics, received The Kennedy Center Honors in 1985, the first dual nominees to do so. Marcia Milgrom Dodge directed and choreographed the show and did a wonderful job scaling down the production while preserving the essential humor and heart of this iconic musical, proving you don’t need 15 sets or 50 chorus members, but with just a couple of Broadway legends (and one really fabulous ball gown) you can bring My Fair Lady to life.

Tracy Christensen designed the costumes, outfitting the ensemble in black gowns and suits that dressed up fine into evening wear or down into servant’s uniforms, and going all out with the main characters – especially Eliza in dramatic black and white for Ascots and sparkling evening wear for the all-important ball. Christian Boy arranged the stage with a few key pieces of furniture to conjure London – a chaise, stone benches, and flowers. Lighting Designer Dan Covey drenched the organ bay of the Concert Hall with blue light and lit the actors in soft gas light yellows.

As the first famous bars of the lively score blasted through the Concert Hall, most of the audience was grinning. The musicians were obviously the cream of the crop and Conductor and Musical Director James Moore and his excellent musicians kept the music brisk and moving, reveling in the familiar tunes.

British Actress Laura Michelle Kelly played Eliza, reprising her stint in the full production at the Theater Royal, Drury Lane in London in 2003. It might as well have been yesterday. Since playing Eliza in London, performed on Broadway in Fiddler on the Roof and won an Olivier Award for her turn as Mary Poppins. Her polished performance was a treat. She was equally at home on the hilarious “Just You Wait,” sung to a skull a la Hamlet and the perfect and joyous “I Could Have Danced All Night.” The by-play between her and Jonathan Pryce (Henry Higgins) with her Cockney accent had the audience chortling.

Pryce has won two Tony Awards and some Oliviers during his 40-year career, defining Hamlet, the Engineer in Miss Saigon, and King Lear. He played Peron in the movie version of Evita opposite Madonna and a bond villain in Tomorrow Never Dies. He was a loveable, hilarious Professor Higgins. The culmination of the evening was his “I’ve Grown Accustomed to Her Face” in a poignant, passionate rendition.

Applause greeted him and Michael York when they took the stage for the first time for their duet, “Why Can’t the English?” Seeing these two greats summon such huge charisma with a smile and banter back and forth was a delight. Linguistics has never been so hilarious.

York has spent half a century in show business, debuting in the 1967 movie The Taming of the Shrew with Elizabeth Taylor and tackling the film version of Cabaret. More recently he has become an acclaimed narrator for more than 90 audio books. His Colonel Pickering was bumbling and hilarious and very believable as he protested, “I’m dashed!”

Gregory Jbara played Eliza’s father, Alfred P. Doolittle, fresh off of his Tony and Olivier winning stint as another Dad in Billy Elliott the Musical. He was raunchy and hilarious with unsurpassed comic timing, especially in several improvised moments, one involving an afghan throw and his trouser button.

Cloris Leachman was entirely off-book and wonderfully scathing in her role as the matriarch of the Higgins family. No one can zing like her. When she hears her son is coming to Ascots she calls for her car to be readied because, “I’ll be leaving…abruptly.” Hilarious!

Max Von Essen, most recently to be seen onscreen in Sex and the City 2 and onstage in Evita brought his soaring tenor and gorgeous looks to “On the Street Where You Live.” Broadway legend Florence Lacey rounded out the cast as Mrs. Pearce, the only sane one onstage at times.

Every so often you get to see masters enjoying their trade and that was certainly the atmosphere at The Kennedy Center for this Fundraising Gala. The iconic songs, the wonderful dances and of course, those voices, all of them so recognizable to any fan of film or theater made for a very special night.

Here’s to a hundred more years of brilliance at The Kennedy Center!

Running Time: Two Hours and 30 minute,s with one 20-minute intermission. 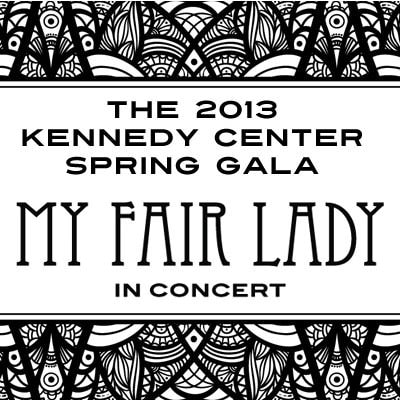 My Fair Lady In Concert played for one night only The Kennedy Center Concert Hall – 2700 F Street, NW, in Washington, DC. For more information on future Kennedy Center events, visit their website.