Scenic and Costume Deisgner Margie Jervis harkens back to 1966 Alabama among the rusty metal walls of Good Sister’s boarding house. A gnarled tree reaches its branches out over a worn picnic table, and some pots and pans hang over a stove that sits on a dirt floor. Although the set is simple and plain, there is a sense of majesty in the twinkle lights that encircle the tree limbs, and an excitement in the standing microphones that promise a good time. Shiny, flamboyantly cut suits, beehive hairdos, and dresses with blinding sequins share the stage with simple housecoats, and overalls.

The real outstanding element of this show is how lighting and sound works together. Musical Director Amy Conley leads a live band, hidden behind the scenes but rocking the house all the same. Sound Designer Jessica Barber uses effects like thunder and chimes to help enhance the experience, alongside Lighting Designer Zachary A. Dalton, who delivers a truly masterful atmosphere, keeping spot and strobe lights in tune with the beats, as well as matching color with mood and tone.

The production begins with the Dupree family sharing the story of their late patriarch, Jaguar Dupree, thriving blues guitarist and the only man to beat a mysterious trickster named Marvell Thunder (RaMond Thomas) at a “cutting contest.” Marvell swore to return for a re-match, and makes good on his promise years later, winning a priceless, hand-made guitar from Jaguar’s overconfident son, Jr. (Michael Mainwaring), and setting his sights on the other half of the pair, the twin guitar that belongs to Jaguar Jr.’s sister, Glory (Shayla Simmons). When it becomes obvious that Thunder is in fact a supernatural entity, their mother, Good Sister Dupree (Iyona Blake) and Uncle Dregster (Malcolm Lee) fight to save the children’s heirlooms…and perhaps, even their souls.

Fantastical elements combined with raw, piercingly real emotions make this production a real knockout! The vocal performances are strong and beautiful, and the actors all prove to have exceptional comedic timing as well. The lively song “This House is Built” welcomes the audience into the evening, and keeps them entrapped with zappy numbers and energetic dance moves such as “Big Money,” a crowd favorite sung by Mainwaring. Good Sister and Dregster share a strong love, which is jeopardized by her fear and hesitation of getting re-married, shown in the sweet duet, “Believe Me.”

However, the most intense connection onstage is that of Glory and Thunder, who redefine the notion of a “love/hate” relationship. Is Glory being manipulated by a charming magical being, or are her feelings for this mystical stranger real? Thunder also finds himself conflicted in the slow rendition of “Even When You Win, Sometimes You Lose.” He believes that the elemental force of joining these guitars would help save his soul from being turned to stone…but perhaps there is another force that he has overlooked?

I was greatly impressed by the strength of these performances, specifically that of Shayla Simmons as Glory Dupree. Starting out as a tragic figure, she finds rejuvenation in the song “I’m Back,” and when tension comes to a head at the final “cutting contest,” her emotion in the song “That Ain’t Right” is enough to make you stop and remind yourself to keep breathing. Simmons is paired perfectly with RaMond Thomas, whose commanding presence as Thunder is one of pure awe and intimidation. This ensemble matches their incredible chemistry with solid direction, and the result is outstanding.

Mythical yet genuine, supernatural but harrowingly real, I highly recommend Thunder Knocking on the Door for an evening of great entertainment.

Running time is two and a half hours, including one 15-minute intermission. 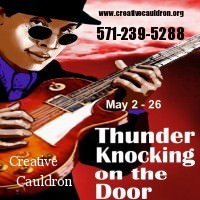 Thunder Knocking on the Door plays through May 26, 2013 at Creative Cauldron at ArtSpace – 410 South Maple Avenue, in Falls Church, VA. Purchase tickets online.