Leave your inhibitions at the door as you step foot into The Keegan Theatre for its scintillating run of The Full Monty, written by Terrence McNally with music and lyrics by David Yazbek. Set in a glum Buffalo, New York after the shut-down of a local steel factory, The Full Monty lays bare the dreams, hopes, and desires of a group of laid-off steel mill workers as they come to terms with their unforgiving circumstance—all in a revealing musical comedy that is sure to tickle your wildest imagination.

When the laid-off, undersexed steel workers Jerry Lukowski (Kurt Boehm) and Dave Bukatinsky (Matt Dewberry) discover that their wives are seeking some adult entertainment away from home at the male strip club Chippendales, they forego the unemployment line and elect to earn their next paycheck by forming a strip team of their own. With unimpressive physiques and dance moves that make William Hung look like a seasoned pro, the boys decide to make up for it by pledging to go “The Full Monty” for the patrons of the club for a one-night only engagement.

The stakes become especially high for Jerry since the money raised will give him just enough cash to make his child support payments and continue to share custody of his son Nathan (Max Jackson). Advised to find six men to participate in the strip show by ad-hoc dance teacher and fellow “strip-mate” Harold Nichols (Charlie Abel), Jerry and Dave rally their former steel mill workers to form a dynamite team of misfit dancers. With the recruitment of loner Malcolm MacGregor (John Loughney), the charming Ethan Girard (Michael Innocenti), and Noah “Horse” T. Simmons (Patrick Doneghy)—a self-assured “Big Black Man”—their act is ready for the mainstage.

Under the direction of the cheeky rehearsal pianist Jeanette (Rena Cherry Brown), the men find their groove as they leave their inhibitions and clothing by the wayside, leaving them in nothing but their scantily clad (and dare-I-say realistic) stripper outfits by Costume Designer Erin Nugent. As the team’s confidence builds with their growing repertoire of hip-shaking dance moves, the audience is taken on a whirlwind journey as the players each come to terms with physical insecurity, financial hardship, and loss as they test the strength of their own relationships—and learn what it means to be a true lover, a lifelong friend, and a parent.

The minimalist set pieces really serve to highlight the brilliant performances on stage, and complement, rather than detract, from the imaginative choreography and direction. The set design by 4 Point Design Collective and lighting design by Allan Sean Weeks illustrate the ways in which the simplest of set pieces can sometimes be the most effective form of storytelling. With a two-tiered stage, audiences have no shortage of activity to follow as the set is transformed from a steel mill to the strip club’s center stage through a clever set of screens on either side of the stage that set the scene through a series of back-lit projection screens. With a giant, vertical sliding door that is also backlit center stage, silhouettes and shadows obscure some of the revealing scenes and sometimes serve as a clever way of presenting parallel storylines or subplots; for instance, clever shadow puppetry provides the backdrop for several scenes including a touching conversation between Malcolm and his ailing mother and a scene in which Malcolm attempts to commit suicide in his car. The brilliance of the lighting design is highlighted when stage actors interact with backlit shadow puppets—creating a sense of whimsicality and intrigue unique to live theatre.

The live orchestra is also not to be outdone. Seated neatly on the top-tier of the stage and barely visible through a series of narrow window panels, the booming sound of the orchestra provides an incredible live music experience that makes you feel as if you too are immersed in the story’s seedy nightlife. The musical direction by Jake Null perfectly sets the tone of the piece—providing both raunchy accents as the dancers make their inaugural strip club debut, yet also providing an unexpectedly tender accompaniment during several of the show’s down-tempo ballads.

Since the show is set in a strip club after all, it has no shortage of big, flashy musical numbers. This includes the opening number performed by the company’s men entitled “Scrap,” during which the soon-to-be strippers struggle with coming to terms with their newfound unemployment. The following number, “It’s a Woman’s World,” performed by the company’s female counterparts is similarly rousing with chilling vibrato and dazzling synchronized choreography. The first act closes with a clever number in which the boys parallel stripping with playing basketball, moving in a dance sequence choreographed by Ashleigh King that expertly blends the pulsating strength of athletic movement with the agile lyricism of dance (“Michael Jordan’s Ball”).

But, despite the big numbers, what I enjoyed most were some of the slowed down pieces where you are truly able to appreciate the vocal range and control of the show’s young stars. One of the first stand-out performances for me was “Big-Ass Rock” performed by Jerry, Dave, and Malcolm—a pithy piece of musical comedy that riotously parodies an attempted suicide. Another one of the standout pieces was Malcolm and Ethan’s “You Walk With Me”—a tear-jerking song performed as Malcolm’s offers his final words to his deceased mother at her burial while his newfound friend Ethan tries to console him. Finally, Jerry’s performance of “Breeze Off the River”—a lullaby-esque song that Jerry sings to his son before his debut performance—was a refreshing stripped-down demonstration of crisp tone of the leading player Kurt Boehm’s voice.

Mark A. Rhea and Susan Marie Rhea direct the reimagining of the Tony-nominated Best Musical in a way that manages to capture both the whimsicality and theatricality of the piece, without losing its decidedly human core. Commendable too is the outstanding courage and bravery that these cast members have to perform such a revealing and edgy piece of musical theatre.

Forget triple threats—The Full Monty at The Keegan Theatre is the new quadruple threat. With singing, dancing, acting, and… stripping on the table, it satisfies in all the right ways.

Running time: Two hours and 30 minutes, with one intermission. 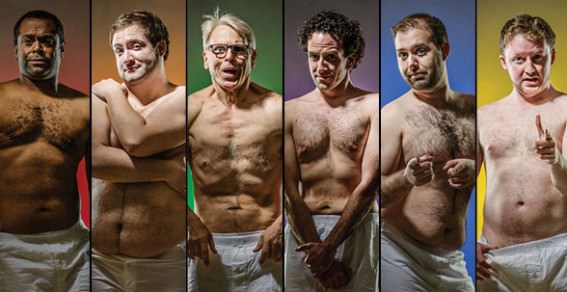 The Full Monty plays through June 1, 2013 at The Keegan Theatre at Church Street Theater – 1742 Church Street, NW, in Washington, DC. For tickets, purchase them online. Recommended for mature audiences.