Anyone fortunate enough to be within range of Bobby McFerrin’s rich voice in his final U.S. performance before embarking on a full summer international tour, in The Kennedy Center for the Performing Arts’ Concert Hall on Monday evening, May 13, 2013, got to experience the maestro of vocal improvisation at his finest. Now a ten- time Grammy Award winner, known and revered more than thirty years for his musical ability, I fully expected to connect with Bobby’s spiritual side and his rare ability to deeply touch everyone with his voice, and I was not disappointed. As is so often said by so many fans and music critics, “Bobby McFerrin is (musically) all that.” Where does his talent come from? With an appreciation for a capella of a connoisseur, quoting Bobby, he says of his singing:

spirityouall, Bobby’s newest album, is scheduled for release on May 14, 2013 on Sony Masterworks. Continuing his tradition of ignoring all boundaries of genre, he incorporated a capella, gospel, folk, rock and blues without sacrificing his signature exploration of the human voice – and body. Comprised of such beloved spirituals as “Every Time I Feel The Spirit;” “Swing Low Sweet Chariot;” “Fix Me Jesus;” and “Joshua Fit the Battle of Jericho” among others, and two of his original songs, “Woe” and “Gracious,” there was not one word, note, syllable, or intonation emanating from his silver-throated vocal chords that did not bathe us in joyful, appreciative, listening rapture. I found it impossible to pick just one favorite from the new material on spirityouall. I had four number ones: Bobby’s polemic anthem “Woe”; his version of “I Shall Be Released (Bob Dylan, words and music);” his touching original “Gracious” and the mesmerizing soulful, “Psalm 25:15.”

Sharing the stage with Bobby were a group of the finest musicians I have had the pleasure of hearing: (Gil Goldstein, piano, electric piano, accordion, arranger); David Mansfield (violin, mandolin, National Resonator guitar, lap steel); Armand Hirsch (acoustic and electric guitar); Jeff Carney (acoustic bass); Louis Cato (drums, vocals, guitar, bass ukulele); and a very pleasant surprise gift – his daughter, Maddie, whose voice was so beautiful and melodic it gave me chills and had me thinking of heavenly angels.

As his beloved listening audience well knows, no two McFerrin shows are ever the same; there is magic in that! Bobby has perfected improvisation as an art form and his creative energy is birthed from having no clue what’s going to happen next. Clearly risky, but so worth it when joy flowed from him to us and we became electrified enough to open our hearts, lift our voices, and sing along with him as he and his musicians performed.

Bobby invited us to merge our voices with his to sing about life’s trials and triumphs on “I Shall Be Released.” With his unique ability to utilize lyrics and lines without words, he effortlessly traded phrases with his band inviting them to spotlight their instrumentality for thirty seconds or more. We all joined in, of course, and I, for one, appreciated the laughter and palpable joy emanating from the audience.

I was impressed with how humble and modest Bobby McFerrin was on stage, so at home and warmly giving of himself and his musical gifts. “Music for me,” says Bobby, “is like a spiritual journey down into the depths of my soul. And I like to think we’re all on a journey into our souls. What’s down there? That’s why I do what I do.” 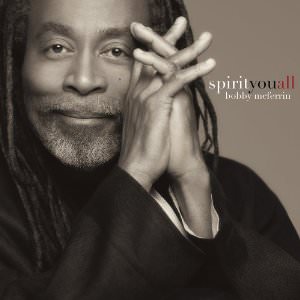