The topic of familial disintegration at the hands of a neurosis and death is a staple of American drama. Along with its Pulitzer Prize, August: Osage County clearly has joined the ranks of Miller and Albee’s masterpieces native to this country, exuding a power unique to Tracy Letts’ unnerving realism. Theater Lab’s production of this show single-mindedly focused on this aspect of Letts’ multifaceted script, with occasional bursts of power and intrigue.

This production is the culmination of a twelve-week educational program called “Creating a Role,” in which the actors would meet a few times a week, in both rehearsal and scene study style settings. This limited time frame for rehearsing contributed to the cutting of about an hour of the script.  In the end, this was for all purposes a good decision; the two and a half hour timeframe strained no patience and did not lead to the sacrificing of story nor character development

Directed by mother and daughter pair Delia and Deborah Taylor, August: Osage County succeeded in its most pressing goal: to educate and train the actors within it. The Taylors brought out emotionally intense performances backed up by a clear commitment to performance-based dramaturgy. That being said, the staging of these scenes seemed to be a bit arbitrary, moving from area to area without any clear reason why. I found myself puzzled as I strained my neck and ears to enjoy a scene set in the theater’s balcony which could have just as easily taken place at eye level. The actual stage design included an imagined porch, dining room, living room, and study all put on stage in a manner that was fine spatially, but paid no attention to what houses actually look like.The staging could have been more effective if the directors had committed to a more interpretive style of blocking.  Their attempt to walk a fine line between reality and theatrical convention took away from the integrity of the story.

While this was a course in acting, more attention to the technical elements would have been beneficial to further engross the audience in the drama portrayed by the actors. The sets, lights, and costumes seemed to only be utilized to perform their most basic functions. The lights simply provided a full wash, the sets modestly alluded to southwestern décor, and the costumes unobtrusively suggested the ages of their characters. While these elements were technically fine (disregarding the above mentioned stage layout), Theater Lab’s tech stung with missed opportunity.

The Taylors achieved a clipping pace from Letts’ dense script, never having their actors seem lost or bogged down within its intricate layers.  However, the strength of their talented individual thespians could not conceal the conspicuous lack of tension. Letts’ play is clearly intended to be nearly stifling as the familial tension boils towards an eruption, while Theater Lab’s production had spotty spurts of intensity that were almost immediately forgotten and moved on from after each scene. While this may have been detrimental towards the proper delivery of August: Osage County’s intended mood and tone, it did not impugn on several outstanding acting performances.

Leading the show as the venomous, pill-popping Matriarch Violet Weston, Adele Robey gave an appropriately bipolar performance. With the gait of a tightrope walker and a voice that rested in a deadly whisper, Robey captured the insanity and the insecurities of her character. Her unpredictable yet empathetic force made her a magnetic fixture of the play. Her daughter and familial usurper Barbara, played by Jo Sullivan, proved herself a dynamic actress. Sullivan swept through a moving arc, initially feigning self control and emotional stability that palpably crumbled into a state of distraught hopelessness. Sullivan and Robey created a potent dynamic as their ploys for power dominated the most overwhelming scenes of the play. 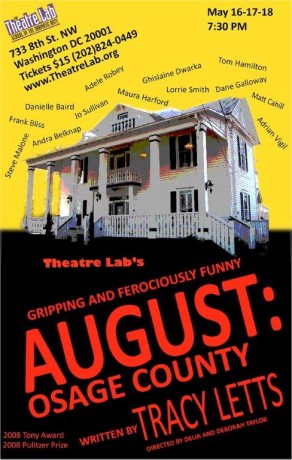 Maura Claire Harford possessed comparable gravitas as Violet’s sister Mattie Fae, performing with a masterful balance of crass comedy and delicate drama. Playing her husband Charlie, Dane Galloway gave the most true to life performance of the night with a laudable commitment to realism executed in a subtle yet comprehensible manner. His physical stiffness and peace-maker mentality made him an extremely likable character, with all the gruffness needed to portray a man of his stature. Steven Malone’s Bill was characterized with a touch of applied artificiality that let his moments of emotional honesty hit all the harder.

With an appropriate amount of intensity, Theater Lab’s August: Osage County is an ample introduction to a fantastic script.  If you haven’t seen this show before, this production may be just the one to introduce you to Tracy Letts’ dramatic genius.

Running Time Two and a half hours, with one intermission.

August: Osage County plays one final performance tonight at 7:30 PM at The Theatre Lab School of the Dramatic Arts – 733 8th Street NW, in Washington, DC. For tickets, purchase them at the door.