“There is nothing more ridiculous than a man in love.” That is the basic premise of Argentine playwright Rafael Bruza’s alternately absurd and poignant Club de Caballeros (Rotas de Amor) at Teatro de la Luna. Like most subjects in comedy, it’s funny because it’s true.

It’s also funny because the production boasts an ensemble of four master clowns: Alex López-Montañez is “Rodríguez,” a cuckolded public official; Jerry Daniel’s “Berlanguita” has carried on a ten-year love affair with a woman from a distance; Alex Alburqueque’s “Artemio” is the victim of unrequited love; and Juan Bianchi’s Harpo Marx-ish “El Mudo” has difficulty letting go of the memory (and cremated remains) of his long-deceased wife.

Together, the actors possess such chemistry, physical comedy prowess, and timing that it is impossible to highlight a stand-out. Each also builds a distinctly memorable character with an element of pathos. This is also a testament to the able craft of Director Mario Marcel, who keeps the action crisp with clear intent, but never mechanical.

In this “Gentlemen’s Club,” the jilted caballeros don’t drown their sorrows in sangria at the local strip club, but rather turn to the hair and manicure salon for solace. Bruza’s beautiful text muses poetically on the folly and pain of love, while providing plenty of fodder for genuinely uproarious comedy: a Garden of Remembrance ceremony gone horribly wrong; an ill-fated self-medication experimentation session; and the most atonal love song in the history of balcony serenades. The English translation by David Bradley and Christine Stoddard (projected as surtitle) is sufficient but practically irrelevant because Marcel’s cast performs with a specificity that transcends any language barrier.

Desigers Rosita Becker, Nucky Walder, and Juanita Real coordinate costumes, props and wigs into absurdist uniformity. The color-themed “baggage” carried by the gentlemen becomes its own element in the story, perhaps representing the object of each man’s star-crossed affection. Marcel’s sound design hearkens back to classic Latino Cinema, and his simple scenic design helps to magnify the power and legitimacy of an actor-driven masterpiece.

Running Time: 1 hour and 40 minutes with no intermission. 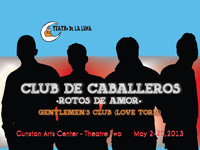