Last night and for just two more shows tonight, the hilarious DC Shorts Laughs is being held in the stunning US Navy Memorial Heritage Center. This short film comedy extravaganza features a side splitting collection of the funniest DC Shorts submissions from around the world and throughout the last few years. Cleverly added to the screenings are three locally known comedians for each of the two unique short film showings, making the event an unstoppable evening of guffaws, chortles, and humor. 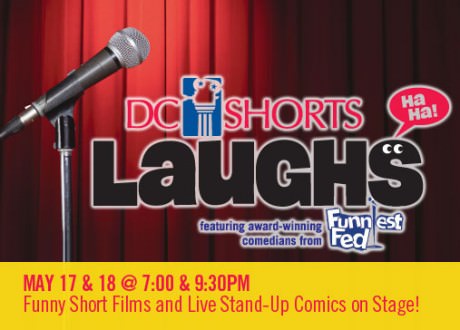 Show A (at 9:30 pm tonight) featured the side splitting, politically incorrect 2011 Funniest Federal Employee, Tim Miller as Host. Former Funniest Fed contestants Abe Barth and Shahryar Rizvi filled out the comedy act and all three charmed the audience, though the donation only bar happily helped improve the flow of chuckles. Barth’s smart, calculating humor impressed as well as triggered  hysterical laughter, while Rizvi wrapped his real life experiences in a flippant blanket of satire and social commentary.
Shorts include the clever and well produced Speed Dating, the oh so refined French Brad & Gary, the racially improper Scrabble and a sneak peek at the best Federal humor in Funniest Fed 2007. The other shorts, Special Delivery, Expiration, Hot Dog and Deleting Emily, all feature joyous reveals and plot twists that will make anyone crack a smile if not laugh outright.
Show B (at 7:00 pm tonight) features Host Jon Mumma and comics Brady Reece and David Miller. Though I did not attend this show, Reece is the 2012 Funniest Fed winner and Miller won the 2012 Funniest Fed in the ‘experienced’ category. All three are sure to put on a good comedy set.
Shorts include the visually stunning A Morning Stroll, and hilarious social commentary Friend Request Pending, both of which I’ve had the pleasure of seeing before, and other expertly curated entries like First Date, El Torero Y La Tora, The Last Man On Earth, Delmer Builds A Machine, and Neighbors. Tonight, Show A and Show B will swap places, so if you happened to attend last night, DC Shorts is offering half off your second ticket to see the other showcase tonight.
5 stars for a can’t be missed, laugh a minute comedian and short film riot, with a tastefully stocked bar to top off the comedy club style of the evening. The entire evening was truly hilarious and I haven’t laughed so hard and so frequently in a long time. This is the ultimate tickle your funny bone show and you must go if you need a good laugh. 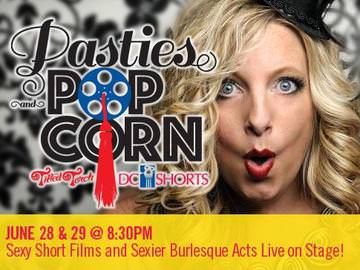 But, if you can’t make the final show tonight, DC Shorts is hosting Pasties & Popcorn on June 28th and 29th, that will feature their sexiest short flicks combined with sensual burlesque dancers for a scintillating evening of entertainment.

DC Shorts Laughs is open for one more night only and plays at the US Navy Memorial Heritage Center – Burke Theater – 701 Pennsylvania Avenue, NW, Washington, DC. For tickets visit them online.