Walking down 7th Street NW, heading from a performance of Georgetown Theatre Company’s Night of the Living Theatre (by Dead Playwrights) at Goethe to Venus Theatre’s Lysistration at the Warehouse, a thought came to me: What if Macbeth was a woman? Not a woman playing a man but actually a woman. Lady Macbeth would be a man. In fact, all the characters would be switched. The Witches would be men. Lady Macduff, a man. Banquo, Malcom, Macduff, Duncan, Ross, all played by women. That would mean women would fight. It would also mean opportunities for women—and men—to play parts they never would be able to play otherwise.

This was 2007. I continued to Fringe in following seasons with The VonPufferhutte Family Singers and I Like Nuts: The Musical with I Like Nuts: The Company.  When that company decided not to do a show, I was inspired to form my own company: King’s Players. Rather than go with my original idea, for our premiere production we tackled an original play, In the Company of de Sade, with an extremely game—and capable—cast. My goal was to make a splash and, thankfully, we did. With Mme. Macbeth, we will do it again. It’s not easy to find a new take on one of the best-known plays in the English-speaking world—a play that is over 400 years old—but we have.

With Fringe 2013, King’s Players will finally tackle the play that inspired me to start the company. Our Macbeth becomes Mme. Macbeth. Danny Rovin’s fights are going to be surprising and exciting in their brutality and variety, including sword, dagger, rope, hand-to-hand, Danny’s signature knee-to-the-face, and a blinding. The cast is extremely talented, passionate, dedicated, and game for almost anything.This Macbeth is unlike anything you’ve ever seen. It goes beyond casting. We’ve reinterpreted the relationships between Macbeth and Lady Macbeth, Macbeth and Banquo, and the Witches and the world of the play. Simply, this Macbeth will blow your mind.

You may think you know Macbeth.

Kat Gadway was my first choice for Macbeth. She played Lady M. with Vpstart Crow and was one of the cast members in de Sade. Next was my fight choreographer (as mentioned before), Danny Rovin, who performed in and choreographed the climactic final fight in de Sade He enthusiastically accepted my offer of carte blanche with the fights and the roles of Witch 1 and Lady Macduff.  The rest of the cast fell into place, starting with others from de Sade, including Mitch Irvinski as Witch 2 and Gentlewoman, Alexia Poe as Macduff, Brittany Morgan (one of my former students) as Malcom and Murderer 2, with Jacinda Bronaugh bravely tackling 4 roles, including the ill-fated King Duncan and officious Doctor.

I had worked with Kimberly Pyle years ago; after seeing her at an audition, I asked her about Mme. Macbeth. She accepted as Banquo and Seyton. I had offered a role in de Sade to Aimee Snow. She was unable to do that show, but able to do Mme. Macbeth, so she is Ross and The Porter. Two additional former students joined the cast: Jane Gibbins-Harding as Murderer 1, Angus, and Young Siward, and Maddie Gadway as Donalbain, Fleance, and Macduff’s Son. The final cast member was Nikki Gerber. She was referred by Kimberly Pyle. I asked her to come read, she fit in with everyone, was perfect, and plays the roles of the Captain, Servant, and Murderer 3. Our stage manager, graduating High School senior Conor Terry, was recruited by our Macbeth, Kat Gadway.

Together, we will challenge the audience. You may love it. You may hate it. You will not forget it. 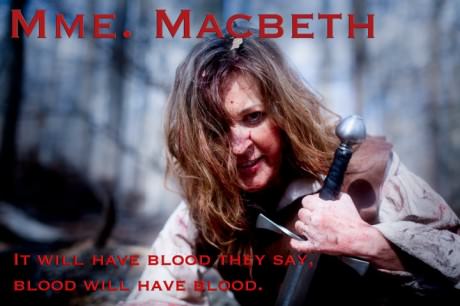 This production is presented as a part of the 2013 Capital Fringe Festival -a program of the Washington, DC non-profit Capital Fringe. Capital Fringe is a 501(c)3 nonprofit organization founded in 2005 with the purpose of connecting exploratory artists with adventurous audiences by creating outlets and spaces for creative, cutting-edge, and contemporary performance in the District. Capital Fringe’s vital programs ensure the growth and continued health of the local and regional performing arts community by helping artists become independent producers while stimulating the vibrant cultural landscape in our city. Official Hashtags: #outsidetwire #capfringe13 #CapFringeSoldOut